The sprawling coastline along the northern edge of the Emerald Isle is truly a bucket list-worthy destination. With lots of stunning sights to explore, here are our top five reasons to visit the North Coast of Ireland.

Stretching west from the northeastern towns of County Antrim through the coastal villages of County Derry and concluding at the northern reaches of County Donegal, the north coast is bursting with attraction for all types of travelers.

From the breathtaking coastal scenery to the abundance of history and folklore just waiting to be discovered, you will be spoiled for choice. No matter whether you’re after an exhilarating adventure experience or are looking for a laidback coastal break, there are plenty of reasons to visit the North Coast of Ireland.

The Causeway Coastal Route, which is perhaps the most famous tourist route in Northern Ireland, is a popular choice for those looking to explore Ireland both by road and by foot. The official Causeway Coastal Way is a waymarked route starting in Ballycastle and concluding in Portstewart. Stretching 53 km (33 miles), this is the perfect route to follow for those looking to backpack Ireland.

Alternatively, if traveling by road is more your style, the Causeway Coastal Route is accessible to all types of vehicles, and plenty of road signs ensure you will be kept on track. So, if you’re almost ready to set off on your Irish adventure, here are our top five reasons to visit the North Coast of Ireland. 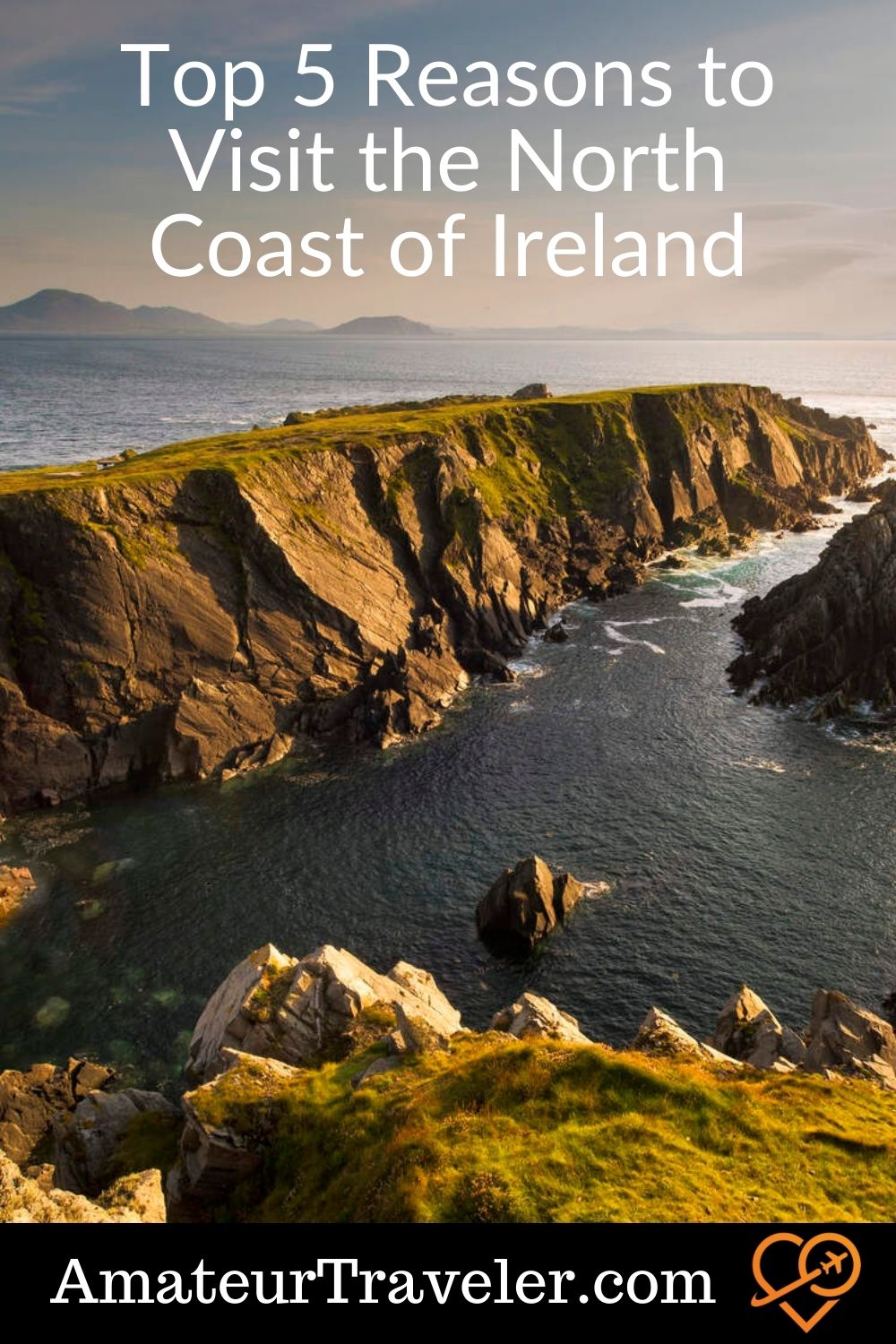 If you’re a fan of the big and small screen, then a visit to the North Coast of Ireland may feel like somewhere you’ve visited before. With plenty of spots along the iconic coastline acting as filming locations for various films and TV shows, the coastal route has become recognizable all across the world.

Perhaps the most famous show filmed along the coast is the HBO smash hit Game of Thrones. Fans of the fantasy drama will recognize much of the stunning scenery as the backdrop for battles and adventures that took place on the screen.

One of the most famous Game of Thrones filming locations that can be found along the North Coast of Ireland is the iconic Dark Hedges. This unusual tree-lined avenue can be found just a few miles inland from the coast and is recognizable for fans of the show as the King’s Road. For reference, we see Arya Stark escape along this road in season two, episode one, ‘The North Remembers’.

Other famous Game of Thrones filming locations you can spot along the North Coast include the Cushendun Caves, Murlough Bay, Ballintoy Harbour, Larrybane Quarry, the Antrim Plateau or Binevenagh, and Downhill Strand. You can also spot famous doors from the series at various locations around the coast. Owen’s Bar in Limavady, Fullerton Arms in Ballintoy, the Dark Hedges Estate in Stranocum, Mary McBride’s in Cushendun, and Ballygally Castle in Ballygally are all proud owners of Game of Thrones doors, which are displayed for all fans to see.

Aside from Game of Thrones, fans of Derry Girls can stop off in the Walled City to walk the streets of Derry, where the girls – and James – undertake many of their hilarious antics. Similarly, if you’ve watched Kenneth Branagh’s Artemis Fowl, you may recognize White Rocks Beach, Dunluce Castle, and the Magheracross Viewpoint. Star Wars fans may also recognize Malin Head, the northernmost point of County Donegal and Ireland, from The Last Jedi.

This is only a small selection of the iconic filming locations you can find along this coastal route. However, stepping into the world of your favorite movies or TV shows is undoubtedly one of the top reasons to visit the North Coast of Ireland. Lots of local tour companies operate film and TV-themed tours to take you to all the most iconic locations from the big and small screen.

4. Outdoor adventure experiences – both in the water and on land

It may come as no surprise that one of the main reasons to visit the North Coast of Ireland is to take advantage of all the brilliant outdoor adventure experiences on offer here. With breathtaking cliff faces, magnificent mountains, and a sprawling coastline perfect for all types of water sports and activities, those who love to explore the great outdoors will find themselves in paradise here.

There are plenty of beaches along the North Coast of Ireland that provide the perfect conditions for coasteering, surfing, kayaking, paddle boarding, and more. The beautiful Benone Beach and the iconic East and West Strands of Portrush are popular with surfers of all ages and abilities. Local surf schools accommodate both children and adults, allowing you to learn the essential skills that will enable you to tackle the waves on your own. Travelling west, Five Finger Strand, Tramore Beach, Marble Hill Beach, Ballymacstocker Beach, and Carrickfinn Beach are all great locations to take on the waves along the North Coast of Donegal.

For those who want to stay dry, there are plenty of great inland adventure activities for all ages to enjoy. Enjoy breathtaking views from some of the most iconic walking routes the coastline has to offer. Some of our favorites are Binevenagh, which overlooks the Limavady coastline all the way over to Donegal, the Inishowen Peninsula Loop, which is often referred to as ‘Ireland in miniature’ for its breathtaking scenery and historic sights, and Glenariff Forest Park, where you can check out the beautiful waterfalls that can be found along the various trails.

With an abundance of adventure activities to enjoy and local companies providing tours, equipment, and guides to keep you safe, there is plenty to enjoy for those who love making the most of the great outdoors.

Some of our favorite towns along the way are Portrush, which boasts two beaches on either side of the town, the famous Ramore Restaurant Complex that serves various world cuisines to a high standard, and plenty of amusement arcades to keep the kids entertained. Portstewart is home to the National Trust Portstewart Strand, which is the perfect spot for a leisurely stroll along the beach, as well as several great bars, restaurants, and ice cream shops. Ballycastle, which sits in the shadow of the Fair Head Cliffs, has a traditional Irish feel, with plenty of great pubs and takeaways, as well as a play park, where the little ones can entertain themselves for hours on end.

In Donegal, towns such as Letterkenny, Dunfanaghy, and Buncrana provide the ultimate Irish seaside feel, making them the perfect stops along the way. With lots of great local restaurants, cafes, pubs, amusement arcades, and more, there is plenty in these coastal towns for both kids and adults to enjoy. Whether you choose to enjoy a delicious, sit-down meal with brilliant views of the surrounding coastline or head into an Irish pub and soak up the fun and atmosphere of a trad music session, the unforgettable experience of visiting one of the quaint coastal towns dotted all along the route is undoubtedly one of the main reasons to visit the North Coast of Ireland.

From castles to natural attractions, lighthouses to statues, and much more, the history, heritage, mythology, and folklore that is just waiting to be discovered is one of the main reasons to visit the North Coast of Ireland.

From the Giant’s Causeway, which, according to Irish mythology, was created when Irish giant Fionn Mac Cumhaill hurled stones and rocks after Scottish giant Benandonner in a fit of rage to the beautiful early 19th-century Fanad Head Lighthouse in County Donegal, which overlooks Lough Swilly and is recognized as one of the Great Lighthouses of Ireland, the northern coastline is home to some fascinating sights where you can hear tales of old, whether factual or mythological.

The ruins of the Medieval Dunluce Castle in County Antrim sit atop the cliff overlooking the Wild Atlantic Ocean, which stretches for miles in the distance. Here, you can learn all about the historic seats of power in Ireland, the significance of this famous castle, and the Clan McDonnell, who once called the castle home.

Not far from here, you can brave a walk across the Carrick-a-Rede Rope Bridge, which takes you from Larrybane to the small island of Carrick-a-Rede. Now a tourist attraction, the bridge was first built in 1755 as a way for the salmon fishermen to access the island without having to use a boat.

Mussenden Temple, the Old Bushmills Distillery, and Rathlin Island are also well-worth visiting along the Antrim and Derry coasts for those interested in learning more about Ireland’s historical and mythological heritage.

When in Donegal, we recommend visiting Fort Dunree, a historic coastal defense fortress located near the town of Buncrana. Grianan of Aileach is an ancient stone fort that is believed to have been built around the sixth or seventh century is a fascinating site for those interested in Ireland’s ancient history. Meanwhile, the 15th-century Doe Castle near Cresslough was the former seat of power of the Clan tSuibhne. This castle is perfect for those who want to learn more about the Medieval side of Ireland’s fascinating history.

Finally, Doagh Famine Village, located close to Lagacurry, is a fascinating and informative heritage village. Here, visitors can wander through traditional 1800s-style Irish streets, take in the informative exhibits, and get a glimpse into what life in Ireland used to look like. Perfect for both kids and adults, Doagh Famine Village provides the perfect family day out, teaching you all about the Great Famine, one of the most difficult periods of Ireland’s history.

1. Stunning scenery – the natural landscape will blow your mind

For us, one of the main reasons to visit the North Coast of Ireland is the unbelievable natural landscape and scenery that makes this area so wonderful to explore. The island of Ireland is known as the Emerald Isle, thanks to its rolling green countryside, beautiful hills and mountains, and natural landscapes. However, the coastline is not to be sniffed at.

Winding its way from County Antrim to County Donegal, the rugged coastline of the North Coast of Ireland is unlike anywhere else in the world. Majestic cliff faces, unforgettable islands, beautiful white sandy beaches, hidden caves, crashing waves, and rocky outcrops make this area a true feast for the eyes. Hence, it has provided so much inspiration for artists, photographers, and filmmakers throughout the years.

Head to the northernmost point of the island of Ireland, Malin Head, for unbelievable coastal scenery. Located at the tip of the Inishowen Peninsula, this rugged rocky outcrop is home to thriving birdlife and rare flora. Enjoy incredible views from Banba’s Crown, and if you time it right, enjoy a natural light show when the famous Northern Lights are on display.

Other beautiful natural sights to explore along the North Coast of Ireland include the abundant beaches that can be found along the coastline. Some of our favorites are Marble Hill Beach, Five Finger Strand, Portstewart Strand, and White Rocks Beach. As well as this, just taking a drive along the iconic Causeway Coastal Route or the Atlantic Drive in Donegal will allow you to enjoy beautiful coastal views from the comfort of your car. We can assure you that you will be blown away by what greets you with every twist and turn of the road. 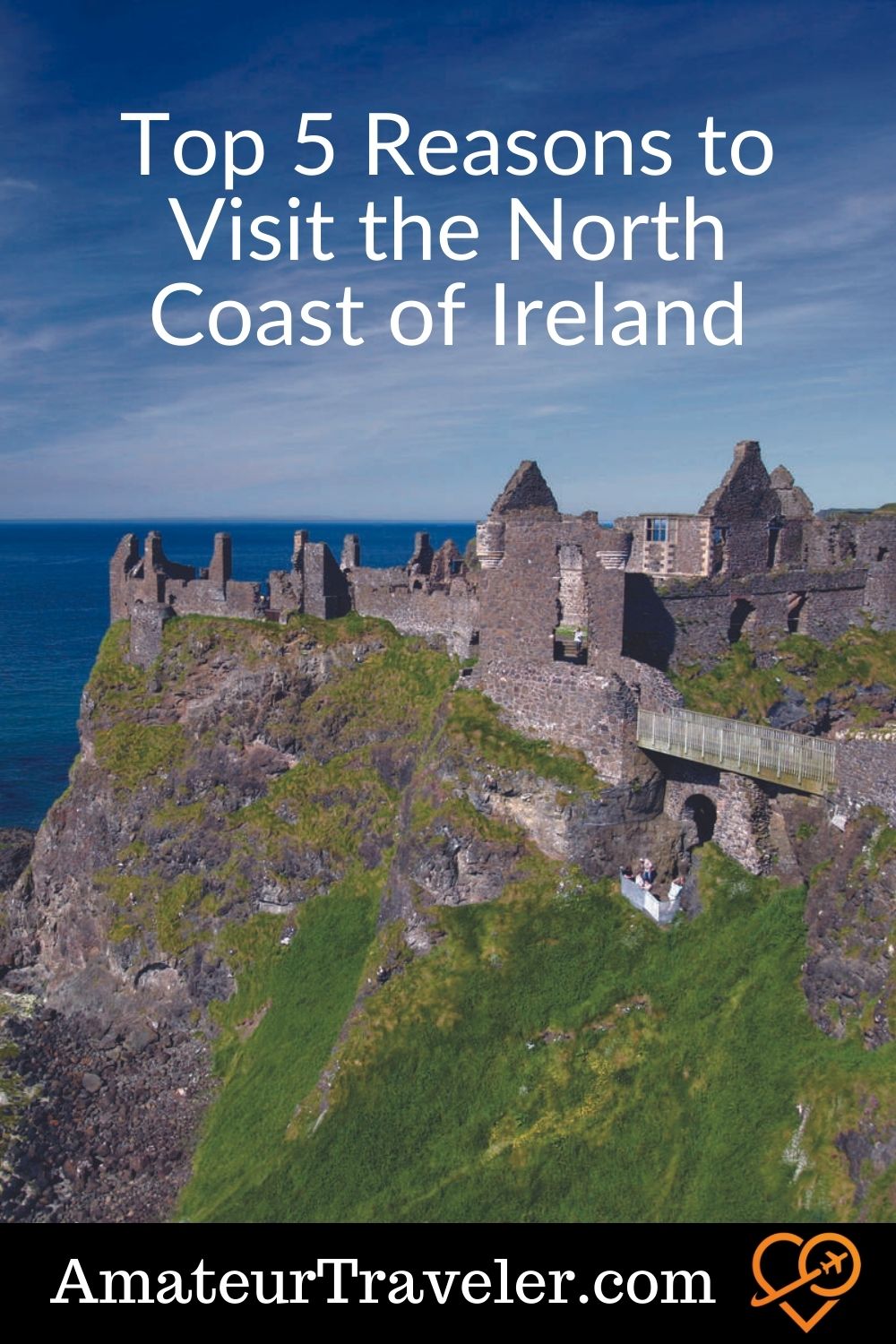