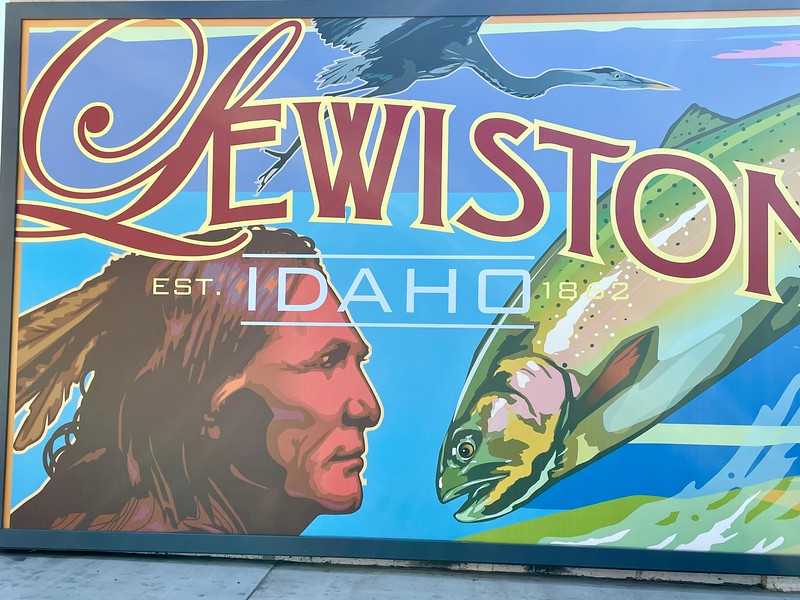 Let’s be honest. When I was invited to visit Lewiston, Idaho by the local tourism board, I am not sure I could have found the “quad cities” on a map. The lure of Hells Canyon, North America’s deepest river gorge, sealed the deal. But my visit to the area also introduced me to its Native American heritage, history, wines, and people. 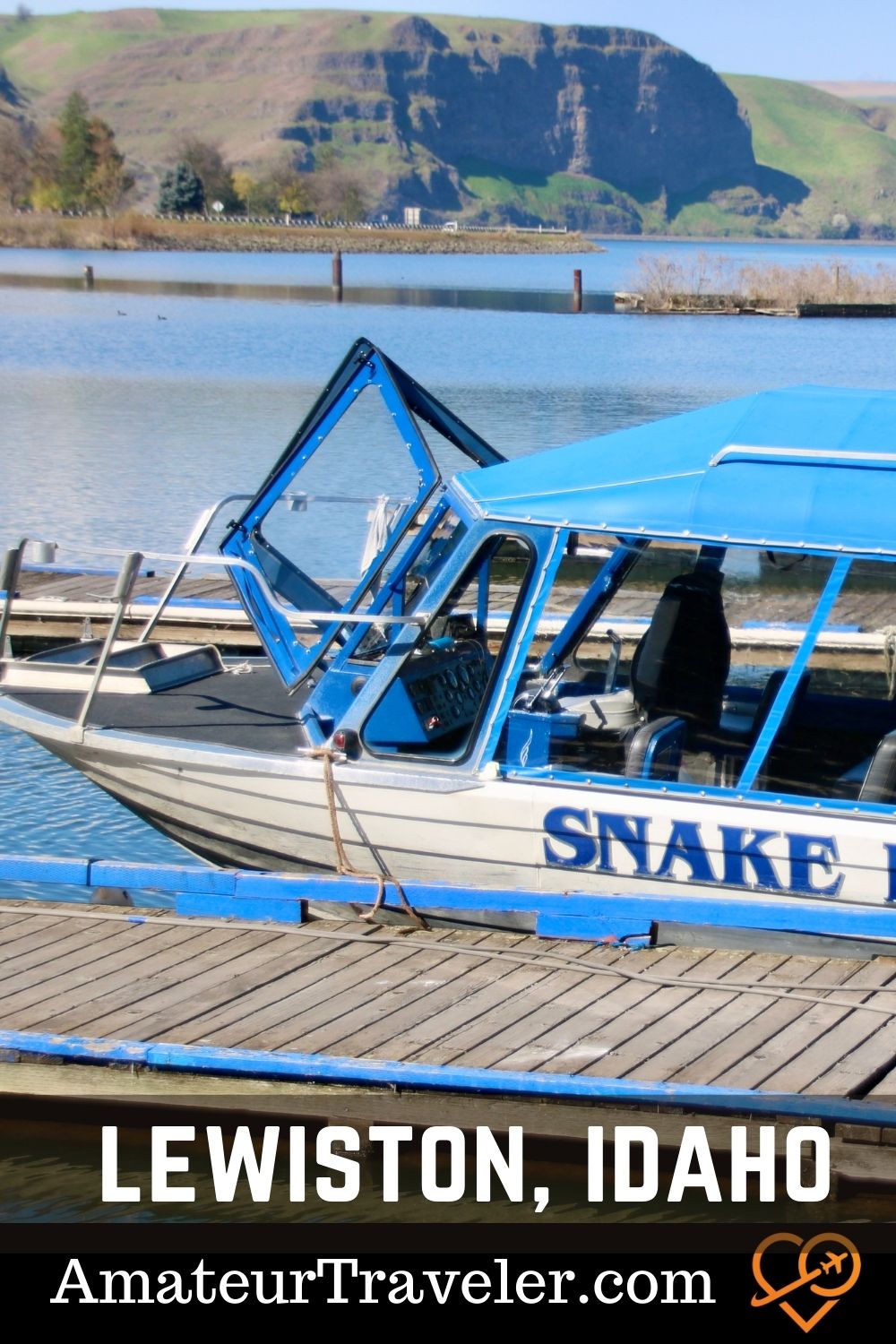 I traveled to Lewiston, Idaho with Stacia Morfin from Nez Perce Tourism. On our drive from the Tri-Cities area of Washington, Stacia exposed us some of the history and culture of the Nimiipuu people, better known as the Nez Perce tribe. 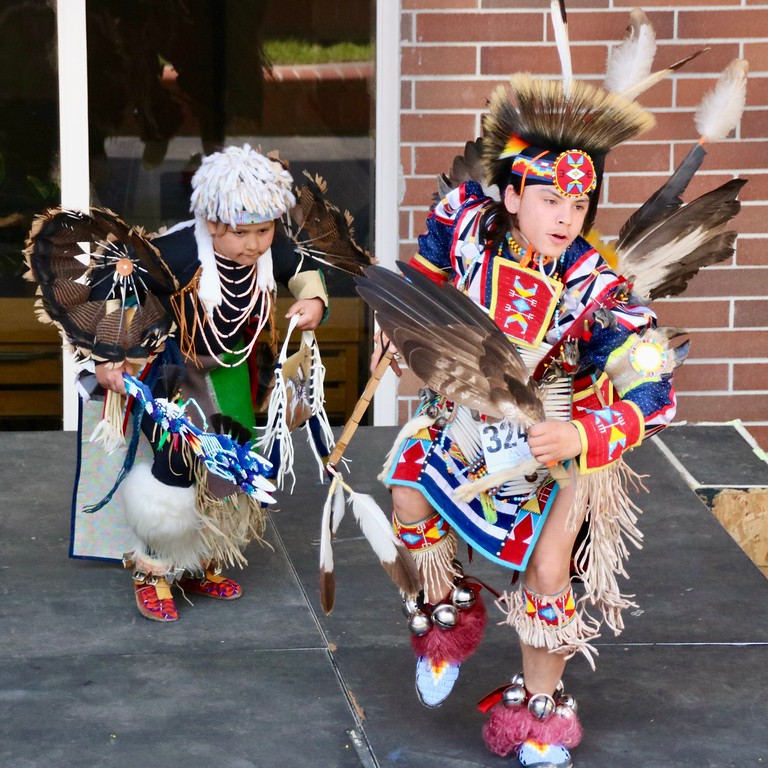 The Nimiipuu have lived in this area for more than 11,500 years and that number keeps getting pushed back further and further as additional archaeological discoveries are made. Nimiipuu literally means “we, the people” in their native language. The label Nez Perce was given to the Nimiipuu meaning pierced nose… which is odd as it was not part of the Nimiipuu culture.

Getting the wrong name was the least of the problems that the Nimiipuu had with their new European and American neighbors. The worst of the problems resulted in the Nez Perce War in 1877. A group of 750 members of the tribe under the leadership of Chief Joseph made a 1,170 mile flight toward freedom as they rejected a treaty that gave up their tribal land and confined them to a reservation.

Their journey ended 40 miles short of the Canadian border and freedom. At their surrender to the U.S. Army. Chief Joseph famously told the U.S. soldiers “…Hear me, my chiefs, I am tired. My heart is sick and sad. From where the sun now stands, I will fight no more forever.”

We saw a performance of Nimiipuu music and dance at Lewis-Clark State College’s annual Art Under the Elms festival. Stacia is the CEO for Nez Perce Tourism which is trying to keep some of these traditions as well as the endangered Nimiipuu language alive.

Nez Perce Tourism runs a number of tours including a Nimiipuu look at Hells Canyon (“Tsceminicum” – where the waters meet) on a jet boat tour, pow wow visits, horse riding sessions, whitewater rafting, and tours of the Nimiipuu Historical Site.

Wine production in the Lewiston area started in 1872 when French immigrant Louise Delsol planted the first vineyard. But, Idaho becoming a wine-growing region has not been easy. The first prohibition society was founded in 1874. Prohibition came early to Idaho, with the state becoming “dry” in 1916, 4 years before the U.S. Congress would pass the Volstead Act and outlaw alcohol in most forms. None of the Idaho wineries survived prohibition, and wine would not come back to the Lewis Clark Valley until 2004. 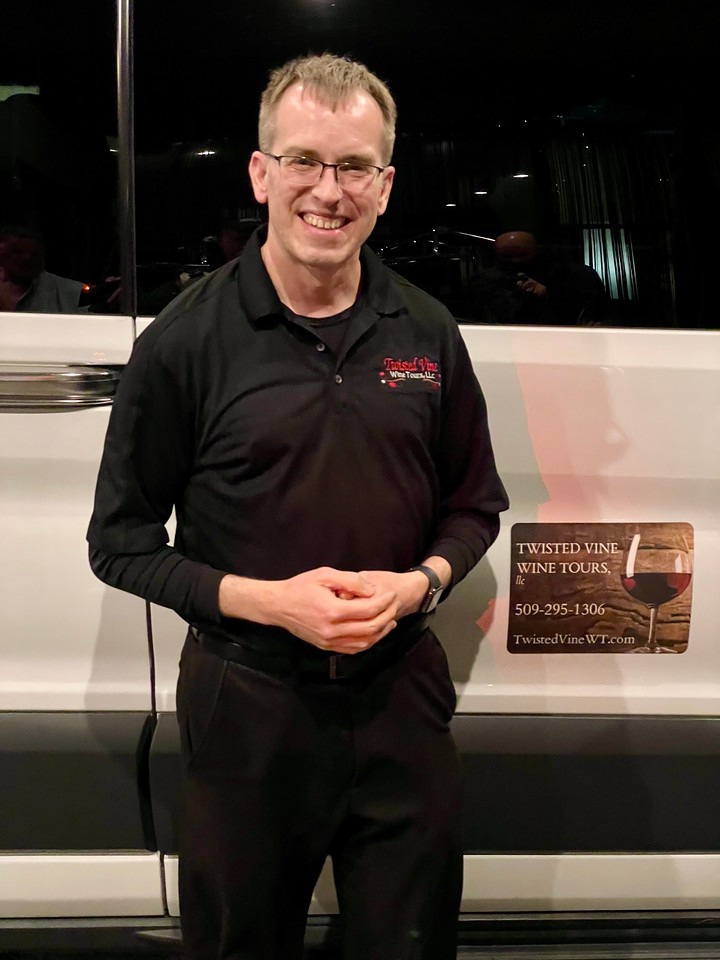 Our guide to Lewiston’s wine past and present was Clint Hoiland. Clint was talked into creating his Twisted Vine Wine Tours business by winemaker Coco Umiker from Clearwater Canyon Cellars. She suggested that, with Clint’s love of wine, a career as a wine tour guide might be more enjoyable. It certainly involves fewer death threats than his 15 years as a parole officer. Let’s just say that Clint can handle a group of wine drinkers and is not so intimidated by the threat of a bad TripAdvisor review (not that he would get any).

The Lewis-Clark Valley now has 10 wineries, 11 tasting rooms, and 18 vineyards, and Clint is a great guide to see them as his whole business was started through friendship with the winemakers. 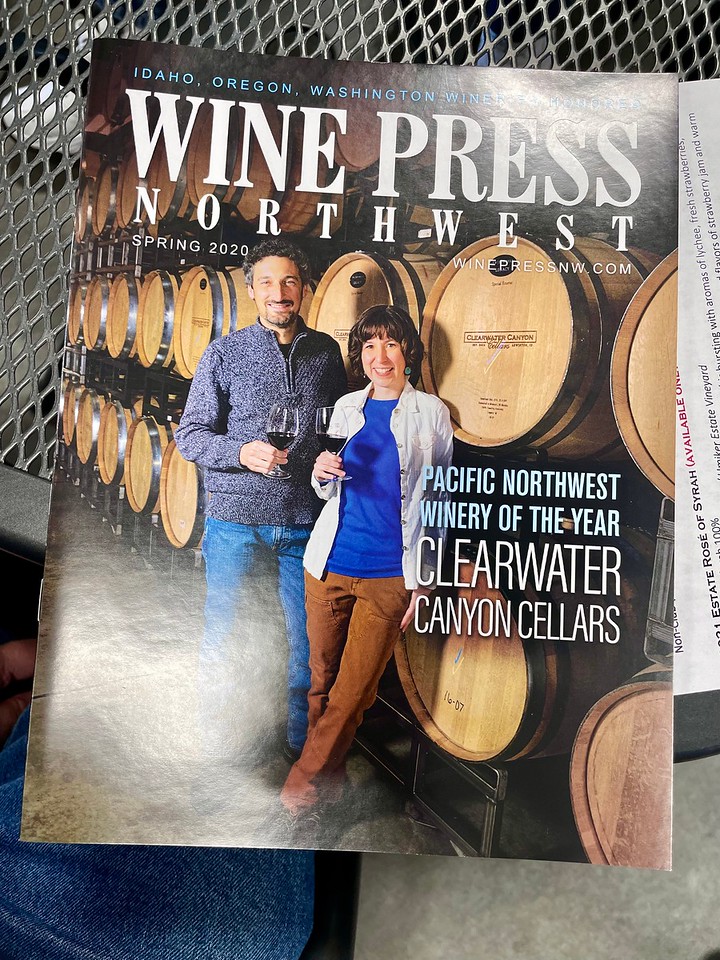 Coco’s Ph.D. was in wine microbiology and what makes wine go bad. She specifically studied the role of the yeast Brettanomyces, also known as “brett.” She spent her research talking to winegrowers about how to make bad wine. She analyzed their wine to help them combat the problem and learned a lot about winemaking in the process.

They started the vineyard when Coco was only 22, and Karl was 29 and when Coco was still a senior in college. They planted their vines on land that Coco’s family started farming in 1916. Coco and Mellisa Sandborn from Colters Creek Vineyards started the process of petitioning for the creation of the Lewis-Clark Valley AVA.

You can see the science background of the Umikers in their meticulously clean winery and their nerdy “Wine Nerd” t-shirts that look like an entry in the periodic table. Coco says, “science is my paintbrush.”

The winery had many lean years. Their first production run was just 4 barrels (100 cases), and they put in all their savings except $25 after buying the barrels. The winery’s production has grown over the years to 4,500 cases. They moved the winery to the family farm in 2016, the 100th anniversary of the farm.

Clearwater Canyon Cellars does not do events… with the possible exception of friends, family, and wine club members. Coco says, “I don’t care what color the flowers are at your wedding.” They just focus on wine, and they make some great ones. Since 2013 they have at least one platinum a year for their wine and were named the Pacific Northwest Winery of the Year in 2020.

We tasted 9 of their wines, including a wonderful Carménère, a number of French varietals, an Albariño, and a wonderful red blend, the Renaissance Red. The 2020 Renaissance Red is a blend of 6 wines, with a base of 50% Malbec and 36% Cabernet Sauvignon. It may have been my personal favorite.

In a nod to the old Frenchman Louise Delsol, his picture is on the label for their Cabernet Sauvignon, and Coco has been known to visit his grave on December 5 to share a drink with Delsol on the anniversary of the end of prohibition in 1933.

Owner and winemaker Art McIntosh at nearby Lindsay Creek Vineyards has a very different winery. When we visited on a Friday night, they had live music as they do every Friday and Saturday night. The back room was prepped for a fraternity event the next day. They also have a pergola outside, with a sweeping view of the valley, which is popular for weddings.

Lindsay Creek Vineyards has fresh baked bread and pizza made with the soft Durham wheat which grows on the farm. Art and Doug McIntosh are 4th generation wheat growers who planted vineyards in 2007. Both went back to school at Washington State University to learn the new business. Art got a certificate in winemaking (Enology), and Doug got one in growing grapes (Viticulture). They would have been about 30 years older than most of their classmates. 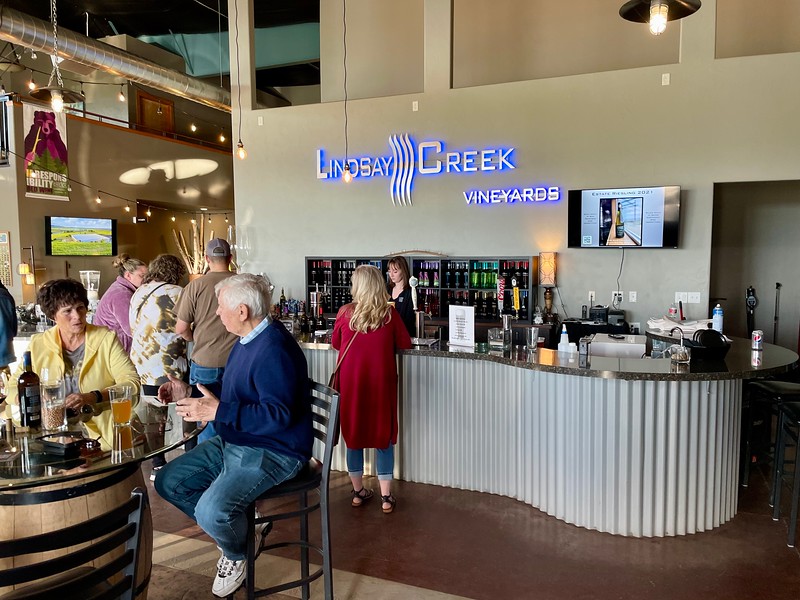 The McIntosh brothers must have done their homework because when they submitted 3 of their wines to the highly competitive San Francisco Chronicle Wine Competition in 2017, they came back with 3 awards:

Events got Lindsay Creek Vineyards through the tough COVID years of 2020 and 2021 because they offered weddings when nearby Washington State was being more restricted. They also sold their wine with their tasty homegrown bread for people to take home. 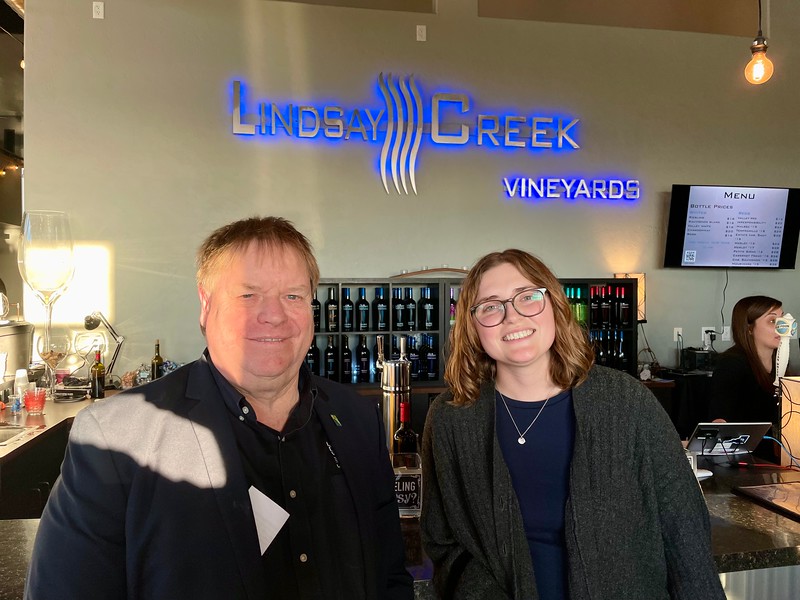 The McIntosh brothers are getting near retirement age and have the winery on the market. Two years ago, they brought in some help with the winemaking with a recent graduate from the WSU Enology program Kelsie Dyell. Kelsie has taken over the white wines and already has her own awards from the San Francisco Chronicle Wine Competition. 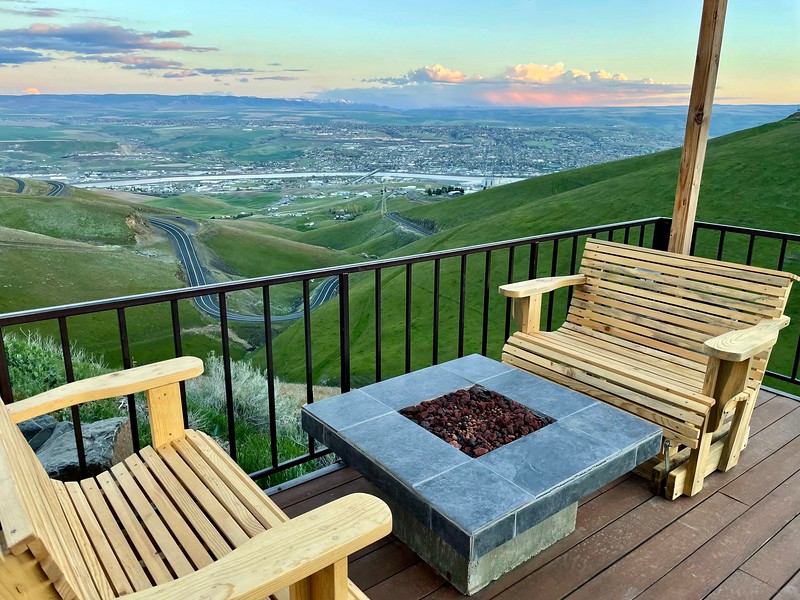 With Twisted Vine Wine Tours, Clint has a package that includes a private dinner with a chef. We had a chance to sample this premium tour with a dinner by local chef Mathew Morgan of FoodOlogy. The dinner was held at the beautiful Spiral Rock Vineyard, located up a winding road to the north of Lewiston.

Stu Davis offers Spiral Rock Vineyard for events and even rents out his home there with a fantastic view. Stu is a beginning wine producer. Try the 2021 Dry Reisling but skip the Syrah. 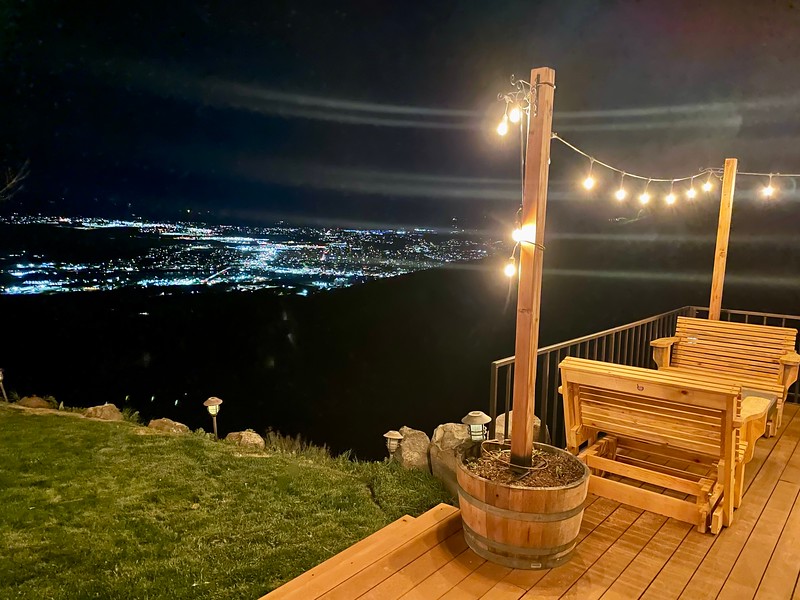 Our dinner was served in 4 courses and each course was influenced by the kind of ingredients that would have been used by the local Nimiipuu people. 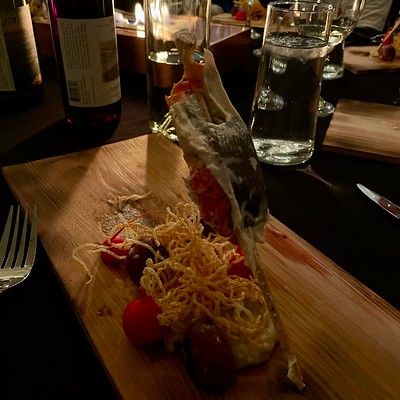 The deconstructed shrimp cocktail that was amazing. The salmon was made to look like it was being cooked over a fire on a stick as the local Nimiipuu would have cooked it. The quail was tasty and the Huckleberry ganache torte was so rich as to be a sort of “death by chocolate” experience.

The excursion that drew me to Lewiston in the first place was taking a jet boat 60 miles up the Snake River on the border between Idaho, Washington and Oregon. We went with Snake Dancer Excursions which offers even longer trips than this almost 6 hour trip. The trip includes a buffet lunch and homemade cookies.

This trip had the right mix of interesting narration, quit moments of beauty and a bit of whitewater adrenaline for my tastes. 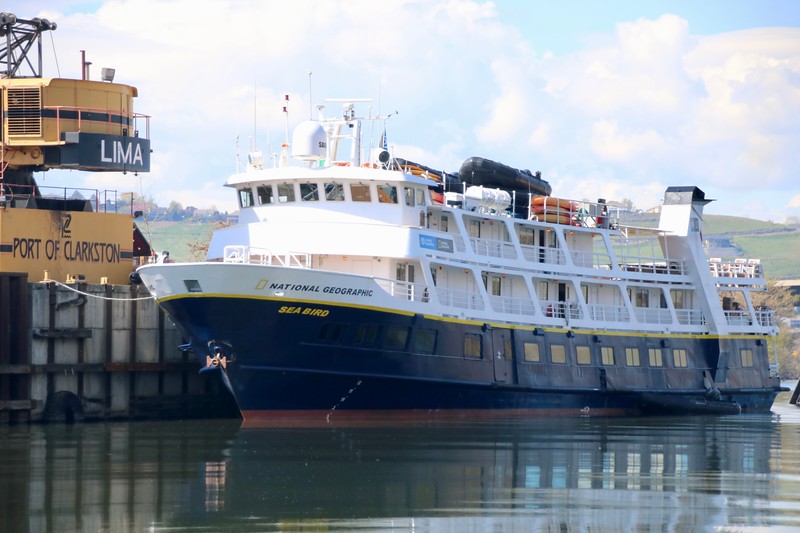 Snake Dancer’s dock is located across the river from Lewiston in Clarkson, Washington. Just after you leave their dock you might be surprised to spot a cruise ship. Lewiston and Clarkson may seem like an unlikely cruise ship destination but a number of outfitters run ships up the Columbia River into the Pacific Northwest.

Some cruise lines like Uncruise terminate their itinerary at the Tri-Cities of Richland, Pasco, and Kennewick Washington where the Snake River meets the Columbia River, but National Geographic / Lindblad Expeditions continues up the Snake River to the Idaho border.

All along the Hells Canyon trip you can see evidence of previous volcanic activity in the area, but no place is it more evident than the twisted basalt columns of Devil’s Slide.

April had some of the most ideal weather for visiting Hells Canyon. The hills were still green from the summer rain and the river was not yet brown from the spring floods. As a bonus, some of the taller peaks still had a snow cap on them. In the summer, this area gets quite hot and a stop to jump in the river will become nearly mandatory.

On a Spring day, you need to be wearing layers. When you are sitting in the back of the boat in the wind it can get chilly quickly as the boat speeds along at 35 miles per hour and an occasional splash can make you quite cold indeed. In this cooler weather the boat has a snug interior where you can warm up again.

The ride is mostly smooth, but these boats have a very shallow draft and you will feel an occasional bump from a rock on the bottom as you navigate rapids, and at those times you will also want to have a good grip on a hand rail as the ride gets a bit more interesting. One of the more interesting stops was to see some Native American petroglyphs. Note the big horn sheep at the bottom of the stone that still might be spotted in the canyon. We did not see any people on our trip with big antenna like the top figure seems to sport.

We enjoyed lunch at the small visitor center at Cache Creek. Some boats will turn around at this spot because the number of boats allowed further up the river is limited. For our tour, this was only a third of the way into the trip.

In the summer and late spring you will also encounter rafts coming downstream from multi-day trips on the Salmon and Snake Rivers. Cache Creek has a small museum and… more importantly… rest rooms.

We stayed at the comfortable Hells Canyon Grand Hotel in Lewiston during our stay where we enjoyed the breakfast buffet as well as the bar and restaurant.

Come for the visit to Hells Canyon, but stay for the wine, the views and the lore.

My trip was sponsored by Visit Lewis Clark Valley (they paid for it), but the opinions are in this post are mine. 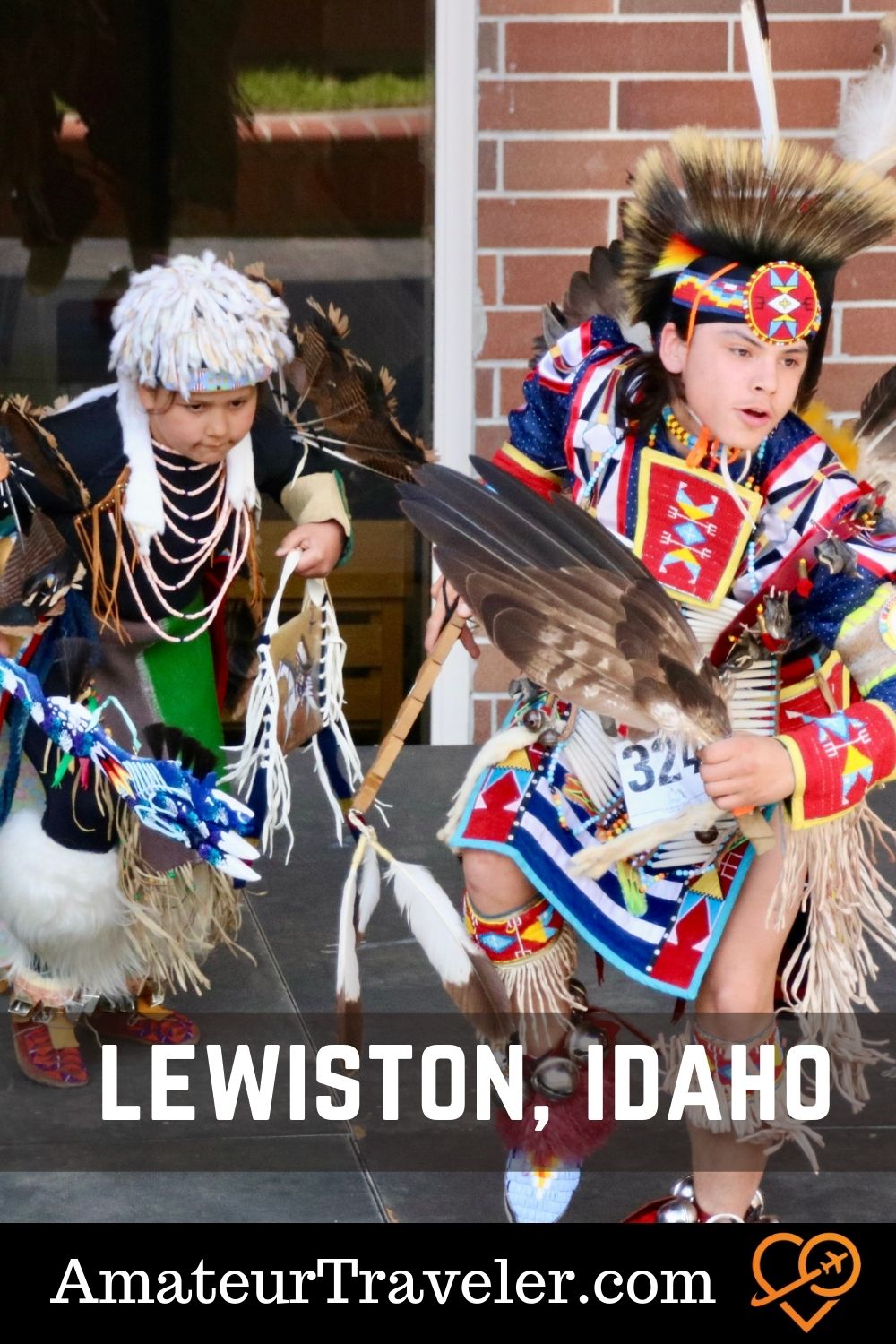 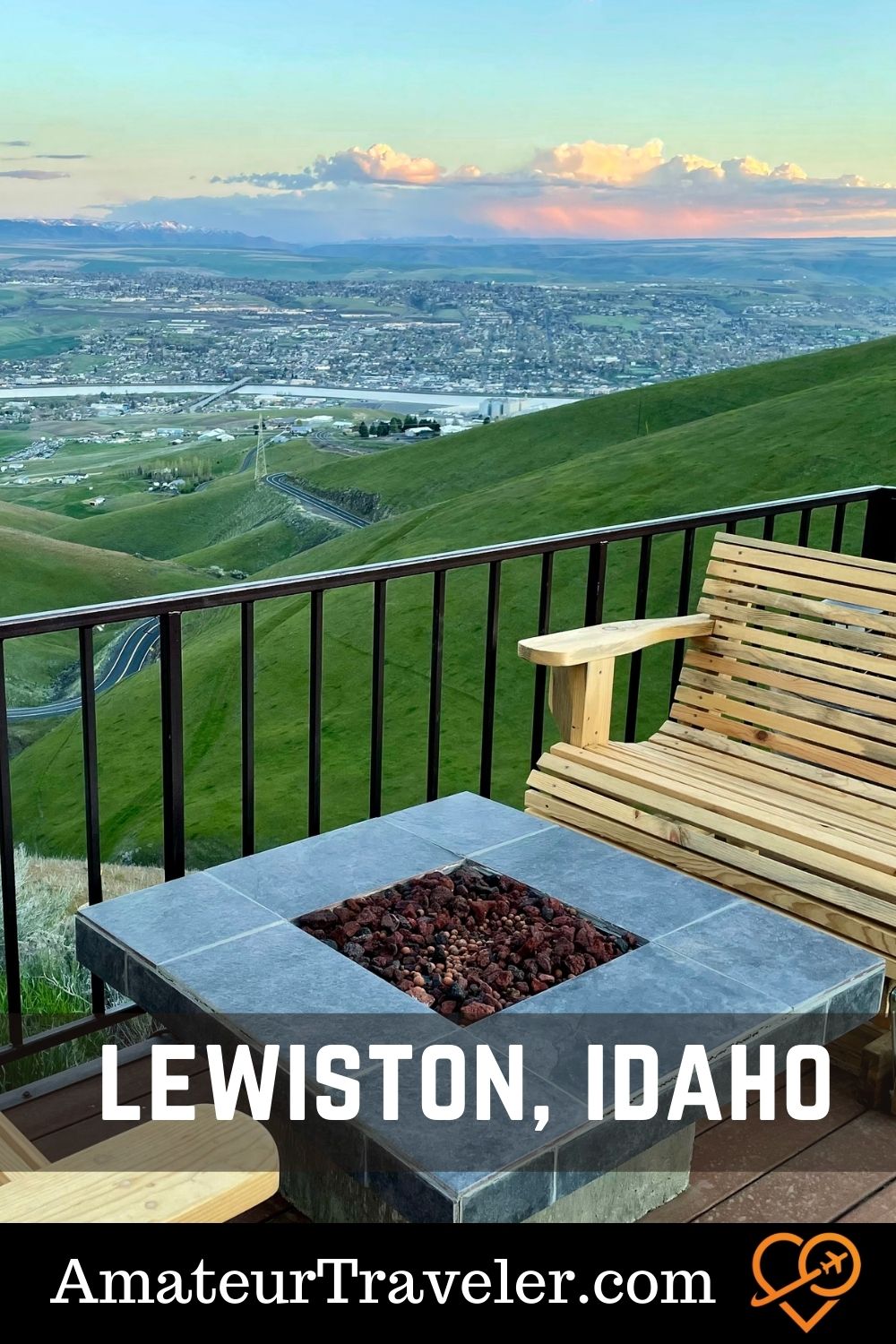