Do you have plans to visit Disney’s California Adventure or Disneyland in Anaheim? If so, you may wonder what the newest attractions are and what’s coming in the next few months. If that’s the case, you’re in the right place.

A Touch of Disney

Over the spring of 2021, Disney California Adventure Park opened the gates for a limited-capacity, limited-time experience. With this ticketed event, individuals could access the theme park for entertainment and dining options, including access to favorite characters and the hottest and most popular theme park snacks. The rides were still closed at this time.

While this was a special event, there may be more like it in the future, so it is something to keep your eyes open for. Even now that the park is back open, special events like this occur from time to time, giving visitors special access to some of the park’s most exciting attractions and sources of entertainment. 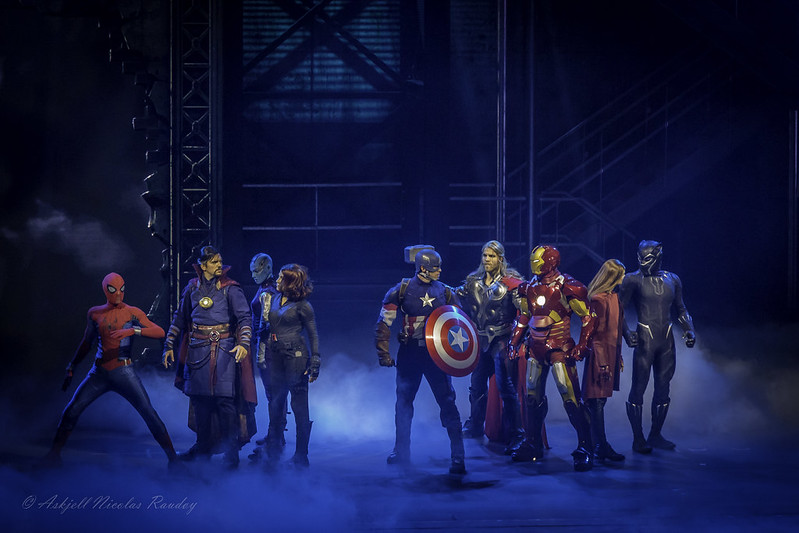 This attraction first opened on June 4, 2021. The Avengers Campus is an all-new, superhero-themed land that is seeking new recruits. You may wonder – what’s going on? Here’s the story. The Stark Expo found in Hong Kong was recently attacked by the evil forces of Hydra, which is what inspired the Avengers to set up an all-new headquarters. With locations all over the planet, the goal is to find, recruit, and train a new generation of heroes.

Be sure you focus on the skies because one of the most exciting features of the Avengers Campus is a “stuntronic” Spider-Man that flips and leads through the air, over rooftops, and then the real Spider-Man can be seen climbing down a nearby wall to greet you, face-to-face. Not only can you see Spider-Man, but he is present in an all-new, redesigned Spidey suit that you are going to love to see first-hand.

It’s been reported that the Avengers Campus is going to open in phases. The first phase involves opening the WEB – Worldwide Engineering Brigade – and the Pym Test Kitchen. During the second phase of opening, an all-new, exciting ride is coming to the land. 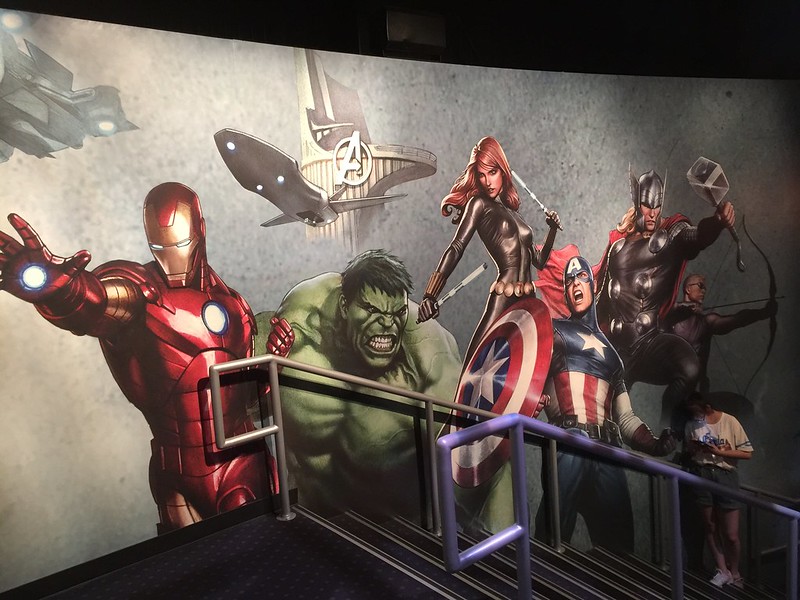 Who wouldn’t want to visit the Avengers Headquarters building? This location first opened in June (along with all the other attractions at this site); however, the ride isn’t quite ready for visitors. Be sure to look to the roof when inside the land, where you can see the Quinjet and several of the Avengers.

According to intel, the Avengers received reports that the Taskmaster (an all-new villain) had plans to break into their command center. To help head off this evil force, Captain Marvel, Captain America, Iron Man, and Black Widow greet the new recruits and watch for signs of a threat. If the Taskmaster and his evil crew happen to appear, there’s no question this band of heroes will be ready to act. During your visit, be sure to keep your eyes open for the confrontation, which will occur throughout the building – even on the roof.

The entrance of the building features the new “E-Ticket” attraction, which is opening later. This is going to let you get right in the middle of the action. You can climb aboard the Quinjet and fly with the Avengers to visit Wakanda and many other places in the great unknown. You can also team up with the Avengers and fight next to them to help save the world from villains. You can find out for yourself if you have what it takes to defeat them all. Do you have the skills and ability to help defeat them?

Originally opened on June 4, 2021, this interactive and immersive ride-through attraction opened on the Avengers Campus. WEB, founded by Tony Stark, is an attraction-based organization. It is the all-new home to the exciting Spider-Man experience and the very first Disney ride to showcase Spider-Man at all.

Have you ever wanted to sling webs from your wrist, just like the amazing Spider-Man? If so, this is your chance, thanks to the innovative and immersive technology in place. You can attend the open house at WEB, which is where the inventors allow you to try out the WEB slinger vehicle.

You may wonder, what else does this fast-action attraction offer? You can sling webs to create a trap for the Spider-Bots owned by Peter Parker. While these bots are typically helpful, some have bugs and have gotten hung up in replication mode. Now it’s your chance to harness your very own superpowers to save the entire Avengers Campus from chaos. There are no height requirements for this adventure, which means everyone in your group can enjoy it.

You can also see these impressive Spider-Bots, robots, and exciting WEB merchandise at the WEB Suppliers, Stage 17, Campus Supply Pod in the park, or Downtown Disney. You can access the ride through a virtual queue. You can first join this queue at 7 AM and Noon every day using the Disneyland App. Be sure to take some time to learn how to use the Disneyland virtual queue.

After you depart from the WEB Slingers ride, you will likely want to purchase your own Spider-bot robot. After all, who doesn’t want an innovative and helpful sidekick? You can purchase at-home kits to build all types of webs and a huge array of other accessories with your Spider-bot. While at WEB Suppliers, you can also find a huge selection of other souvenirs and swag to purchase. 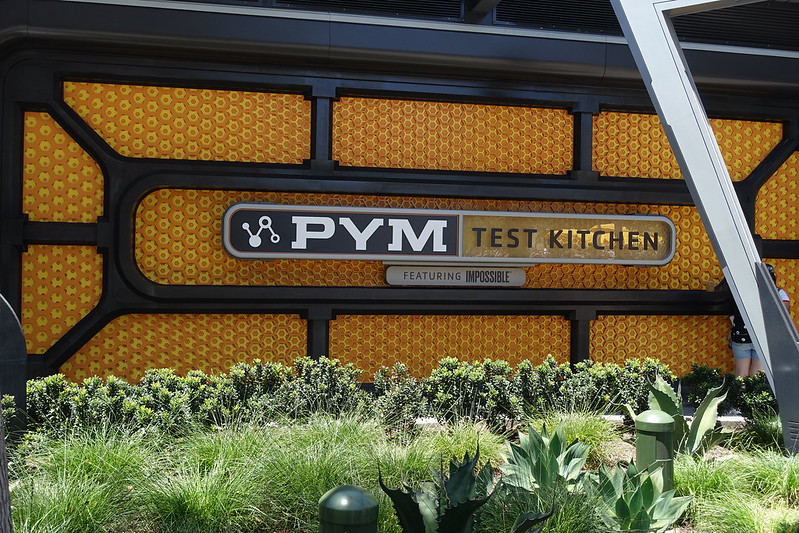 This also opened on June 4, 2021, along with the above-two attractions. Here, you can see how Ant-Man and The Wasp use the subatomic “Pym Particles” to grow, shrink, and change their mass and size. The eatery itself is nothing short of impressive, and all the food you can find here has been enhanced using Pym Particles. Some foods are shrunk down using red particles, while others have been made larger using blue particles.

This is an exciting restaurant on the Disneyland campus and has a little bit of everything. You can enjoy huge meals that are perfect for sharing or shareable bites and tiny treats. Since it is a quick-service eatery that was constructed in an old lab facility, you will also see fun décors, like large condiment bottles and giant soda cans. You can even read the entire menu of a huge cell phone. This eatery uses mobile ordering, and the pick-up windows are released throughout the day.

Here, you can enjoy a quick-service location that provides alcoholic drinks and an array of tasty snacks. The large beer can located next to The Pym Tasting Lab may give you a clue to the type of beverages you can enjoy at the location. There are all-new cocktail experiments, craft beers, and unique taps that can fill glasses from the bottom to the top. You can also enjoy Snack Molecules from this location. 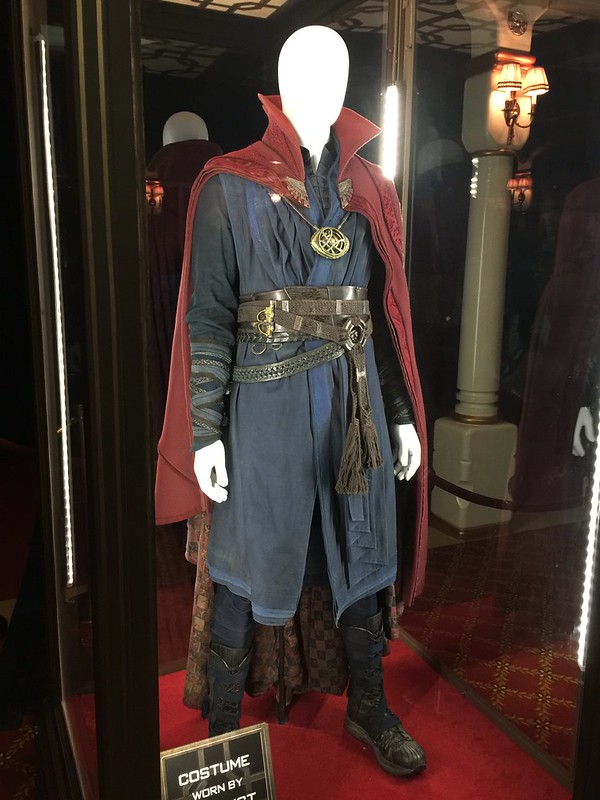 During the late 1940s, the Stark Industries complex was constructed on a remote location found near Los Angeles. For years, there had been rumors all about unexplained energies and events that were taking place. When you visit the area, you will find that Iron Man has extended an invitation to Doctor Strange to come to the Avengers Campus and help teach the new recruits all about the mystic arts that he possesses. Doctor Strange eliminated all cloaking speeds around the area, which has revealed the Sanctum to the entire world.

At this location, you can see all the ancient ruins that have been hidden away for hundreds of years. You can learn from Doctor Strange about the ancient battle that had the potential to tear a hole in the fabric of reality and time and how this battle resulted in the Orb of Cagiliostro’s creation. It’s best to visit this area at night, which is when the Orb is most active. When it is dark outside, you can see the Sanctum full of magical energy.

You can also see Dr. Strange showing off his mystical abilities. Who knows, you may leave this location with all the answers to the mysteries of the multiverse. 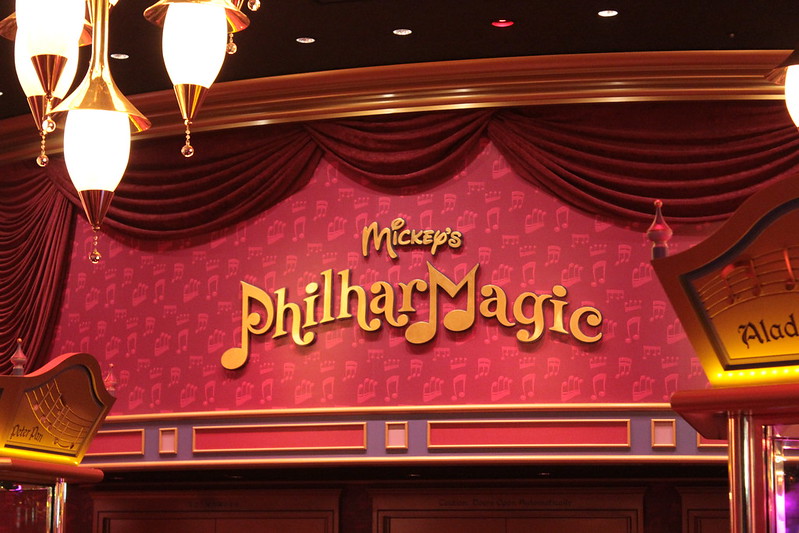 At Mickey’s PhilharMagic, you can now enjoy a scene from “Coco.” This new scene was debuted at the attraction with “Un Poco Loco.” The score is completely unique to the attraction and combines unique animation from Disney (featuring Donald Duck) and Pixar.

Have you always wanted to experience a Disneyland After Dark Party? If so, you will find the experience at the California campus is dark indeed, thanks to the villain theme. The event requires a separate ticket with guests being able to enter the park starting at 6 PM.

Most people are attending the party dress up in elaborate costumes (with some guidelines applying to costumes) for fun. The event also features a Villains Cabaret, including a cast of outlaws who dance and sing their way through the venue. There are also DJ-hosted parties, character greetings, and so much more to see and enjoy. 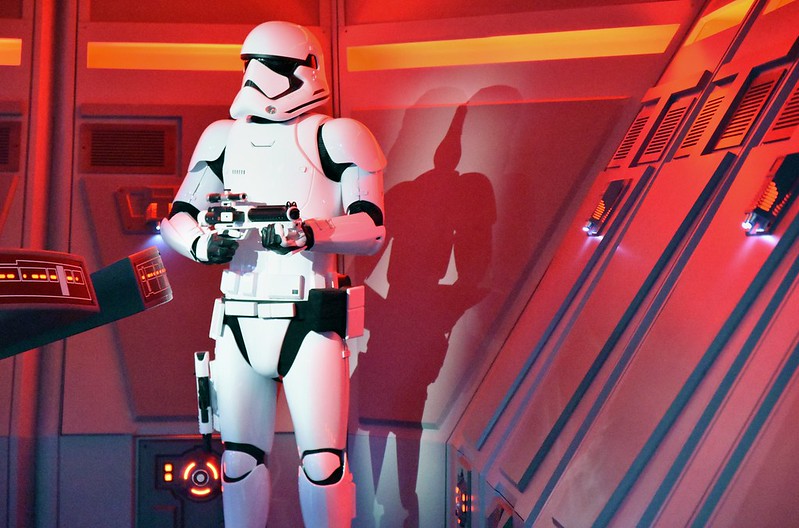 Star Wars: Rise of the Resistance

An all-new ride now opens in Star Wars: Galaxy’s Edge was originally opened for approximately eight weeks before the entire park closed due to the pandemic. Because of this, it is still considered a relatively new ride for those going to the park. When you step inside, you can experience an epic battle between the First Order and Resistance. During the battle, there are appearances by Kylo Ren, AT-AT Walkers, and Storm Troopers. This ride also features a virtual queue. You can figure out how to do this online and by using the Disneyland app. 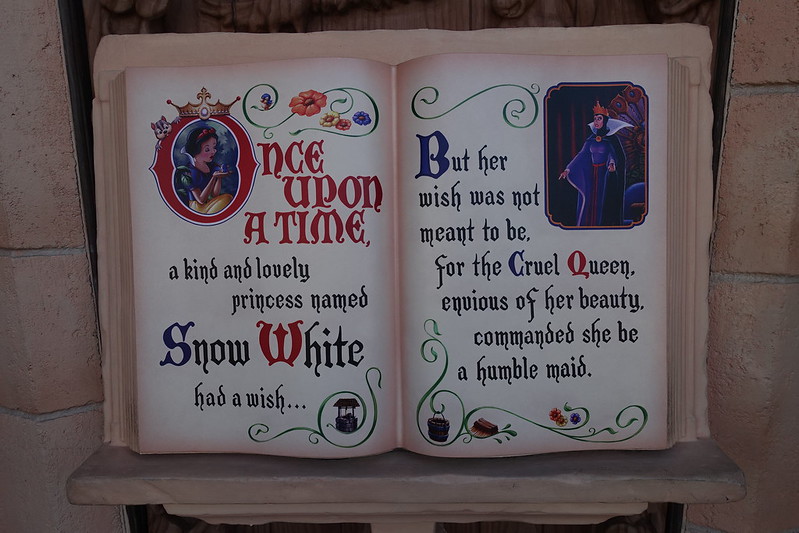 A dark ride in Fantasyland has been around since the park in California first opened, but it recently got a rather impressive makeover. The ride was originally called Snow White’s Scary Adventures and underwent a serious refurbishment right before the park closed for the pandemic. Now that the park is reopened, it has a more “enchanted” storyline. All-new scenes, new music, laser projections, an all-new animation system, LED black lighting, and amazing visual technology. Even better, the ride has enhanced the experience by pleasing all the senses, including your nose with a slight tinge of apple pie in the air.

Snow White gets the “happily ever after” that everyone agrees she deserves with this new ride. This formerly scary ride is now much more kid-friendly and something the entire family can enjoy. While this is true, you will still be able to see the witch and evil queen. 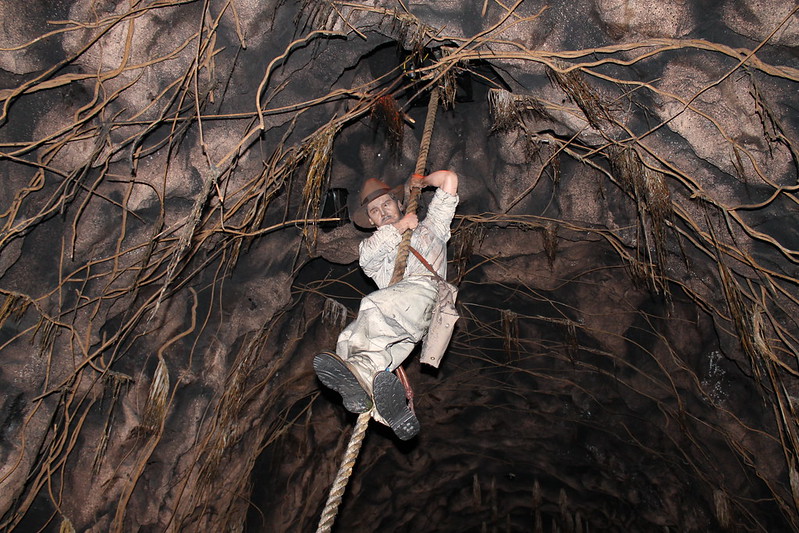 The refurbishment of the Indiana Jones Adventure was something many visitors were looking forward to. It was expected that the plank bridge would be replaced, and the rockwork would be completely refurbished. While there is no set completion date for these projects, it is something to look forward to in the coming months. Chances are the experience will be something bigger and better than you ever imagined. 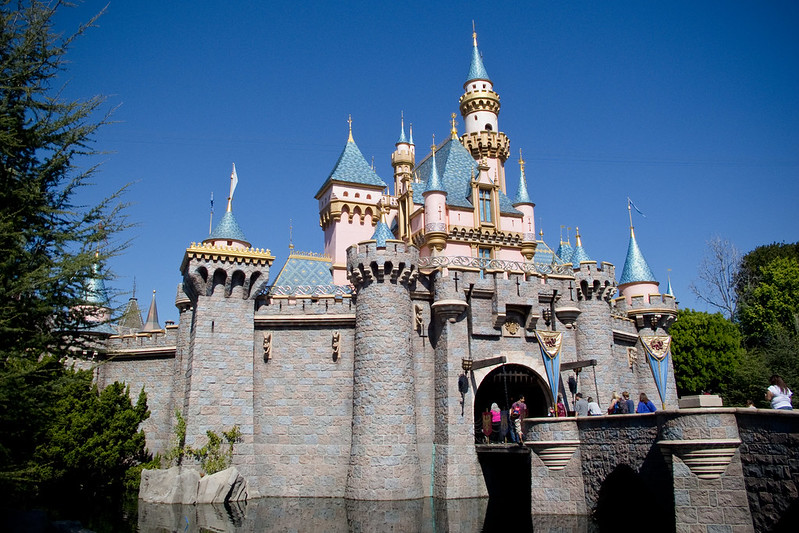 Are you planning a visit to Disneyland, California, in the upcoming months? If so, the list and information here should provide you insight and information about the latest and greatest available attractions. Are you ready to see for yourself? If so, take some time to plan your visit. Make sure these rides and experiences are on your must-see list, which will pay off and help ensure you make the most of your visit to this park.

You won’t be disappointed with all the latest and greatest adventures and rides that have come to the Disneyland California campus. Being informed and knowing what to expect from your Disneyland adventure will help ensure you don’t miss any of the best experiences the location offers.