On a long weekend trip to the Sonoma wine country consider taking a break for the normal sipping and sniffing of wine tasting and head to the cool and rugged Sonoma Coast with its remote beaches, its windswept bluffs, its hikes, and its surprising history.

Bodega Bay has only around 1,000 people but that still makes it the most populous town on the Sonoma Coast. The town is best known for being the site of the 1963 Alfred Hitchcock film “The Birds”, but the history of the town goes back a bit further than that.

Bodega Bay is named for the Spanish Peruvian explorer Juan Francisco de la Bodega y Quadra… who oddly never visited it. He did discover nearby Tomales Bay (which was the original Bodega Bay). It was the Russians who were the first Europeans to discover the bay in 1807. Russians from the Russian-American Company sailed down from New Archangel (Sitka) in Alaska to build a trading colony in the area to help feed and supply their Alaska operation. The Russians named the bay Rumyantsev Bay after the Russian Minister of Commerce. The Russians would stay in the area until 1842 but moved their colony up north to Fort Ross… but more on that later. 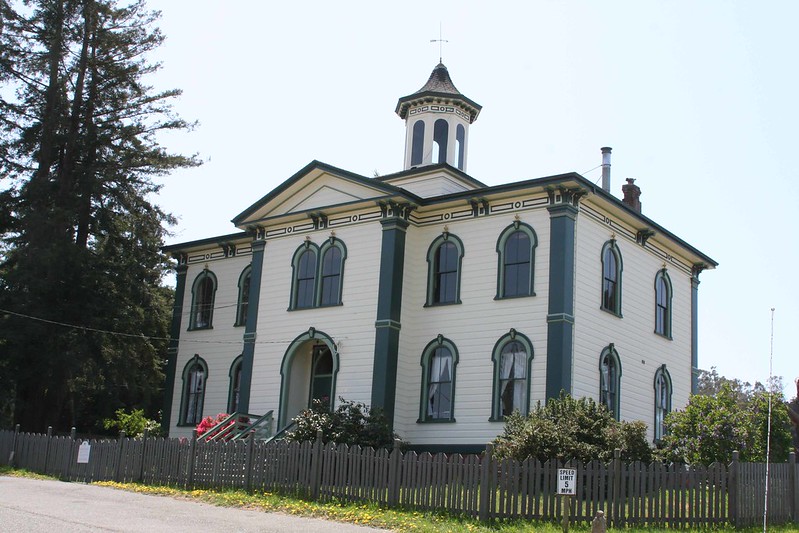 The Birds – The Movie

If you are a fan of the movie The Birds, there are a few movie locations in the area that you will recognize. The Potter Schoolhouse at 17110 Bodega Lane in the nearby inland town of Bodega was used for the famous scene where the birds gathered ominously on a jungle gym before they attacked. The structure is now a private home so don’t plan on visiting the inside. St. Teresa of Avila church in Bodega was also briefly featured in the film.

You can’t rent a rowboat to row across the sheltered bay as Tippy Hedron did, but the bay might be a great place to rent a sea kayak.

If you really want to see sea birds in Bodega Bay then make your way around the bay to Bodega Head which is the southern end of the Sonoma Coast State Park. Bodega Head can be a great spot to see wildlife in the area. It is one of the best places on the coast to see whales as they migrate north to Alaska from Mexico. The best time to see whales is February thru April.

The area offers so easy hiking up to the tip of the point along the cliffs high above the water. Pack an extra layer for this hike as anywhere along this coast can be quite windy and can easily be 20 degrees cooler in the summer than the inland areas of Sonoma county.

Besides the many birds, there is other wildlife to keep a sharp eye out for like deer.

If you look to the south from the ocean side of the point you can easily see Point Reyes National Seashore and to the left of them the long Skinny Tomales Bay. If you look at Tomales Bay on a map this long skinny bay seems like an unusual shape. The bay is bisected by the San Andreas Fault so that everything you see to the left of the bay is the North American tectonic plate and everything you see to the right of it, Point Reyes, is the Pacific tectonic plate. Point Reyes is slowly heading your direction… but way too slow to make a difference in your lifetime. But keep in mind where that faultline is and we will get back to that.

The inland side of Bodega Head has a great view of Bodega Bay which has a very small opening and is quite protected by a skinny peninsula with the two-mile-long Doran Beach. If you want to get to a beach in the area, Doran Beach is a favorite of locals. There is also a campground on the end of the peninsula if you are looking for a place to camp in the region.

Hole in the Head 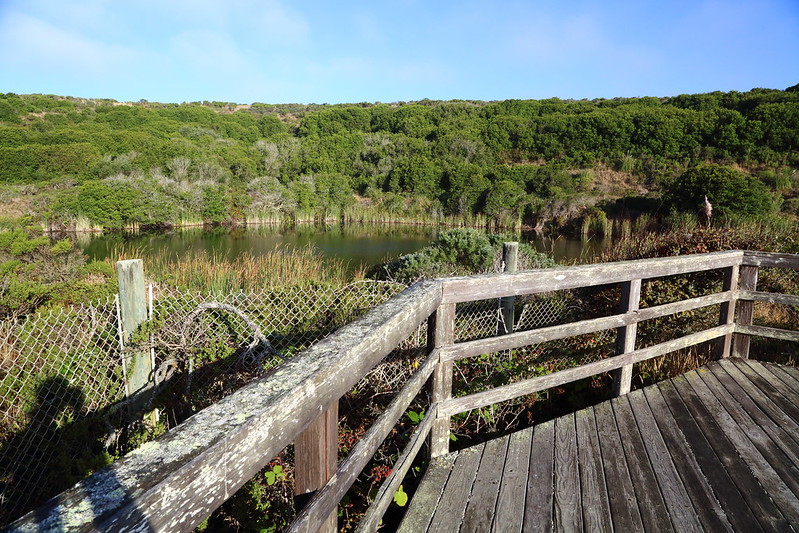 Remember how close that large earthquake fault was to Bodega Bay and Bodega Head? Funny thing is that despite that placement the local power company Pacific Gas and Electric started construction of one of the largest nuclear power plants in the world on Bodega Head. Some people thought that seemed like a rather bad idea. One of the most notable protests happened on Memorial Day in 1963 when 1,500 balloons were released from the site of construction. Each balloon had a note saying “This balloon could represent a radioactive molecule of strontium-90 or iodine-131.” Construction on the plant was stopped but not before a 70-foot hole was dug for the foundation.

This hole is now known as the “Hole in the Head”. Over time, it filled with fresh water and attracts migrating birds to the area. Seriously people… did we need to attract more birds?

Bodega Bay is known for seafood and there are many local options if seafood is your jam. One very popular spot is Spud Point Crab Company by the marina on the Bodega Head side of Bodega Bay. It is a hole-in-the-wall place with outdoor seating that is known for its clam chowder.

If you prefer BBQ to seafood I would recommend Ginochio’s Kitchen which is a small restaurant on the east side of the bay. Ginochio’s Kitchen has a great outdoor patio. It serves breakfast from 9-11 am and lunch from 11 am – 3 pm. Try the brisket or the pulled pork but leave some room for fresh baked goods. 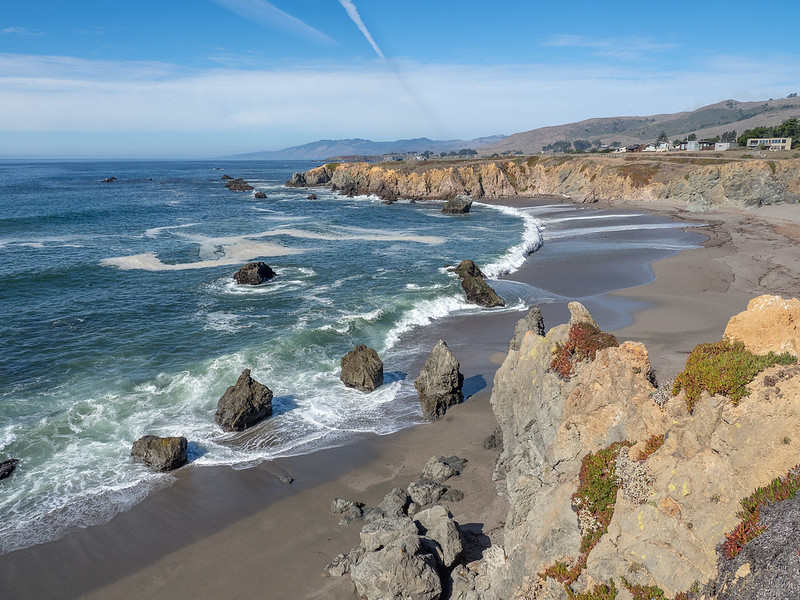 There are four different campgrounds in the park. Two are on are near the shore: Bodega Dunes Campground and Wright’s Beach Campground. The other two are inland of Highway 1: Willow Creek Campground and Pomo Canyon Campground.

Local school kids learn about tide pools and the life they contain at a program at Shell Beach. Shell beach is also popular for beachcombers.

If you are looking for the prettiest stretch of beach, I am going to recommend Goat Rock Beach (pictured above) which has picnic facilities, restrooms, and a colony of adorable harbor seals. 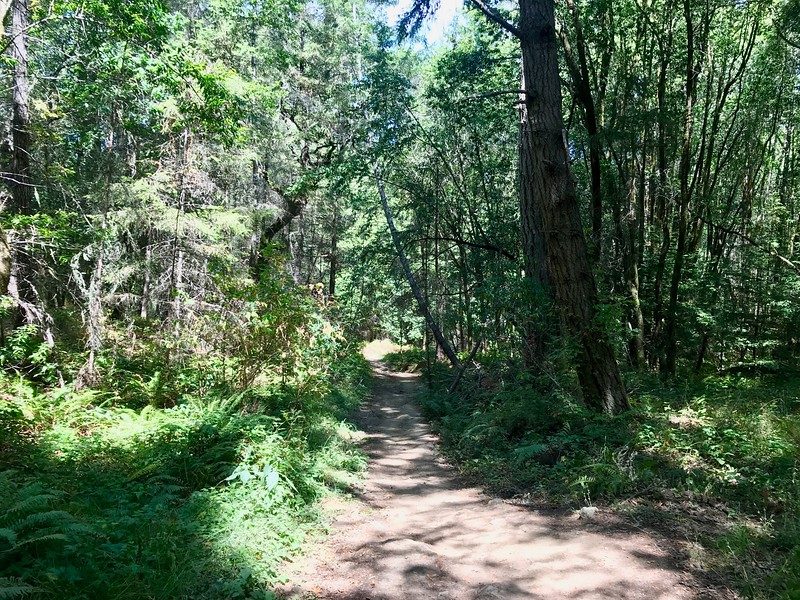 If you are looking for more than a leisurely hike on the beach, Sonoma Coast State Park has some inland hikes like the hard to find Islands in the Sky Loop.

Finding the start of the trail is not easy. Take Moscow road south from Duncan Mills on the Russian River. On the south side of the Russian River take the very first road to the right which is Freezeout Road. On your left, a little way down will be a small road and a locked gate which is the start of the trail. If you get to a sign that says private community, then you drove too far. Park on the side of the road as there is no parking area.

The trail is mostly shaded but goes unrelentingly up. We did this hike on one of the hottest days in the year with not enough water which was a bad idea. 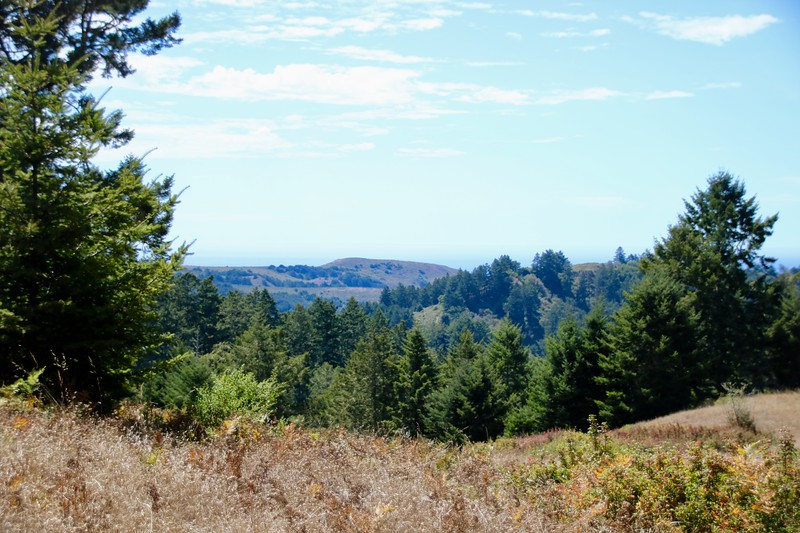 From the top of the loop, you have a view over the coastal hills of Sonoma Coast State Park. This one will earn you that ice cream or pie at the Chile Pie Baking company in Guerneville on your way back inland. 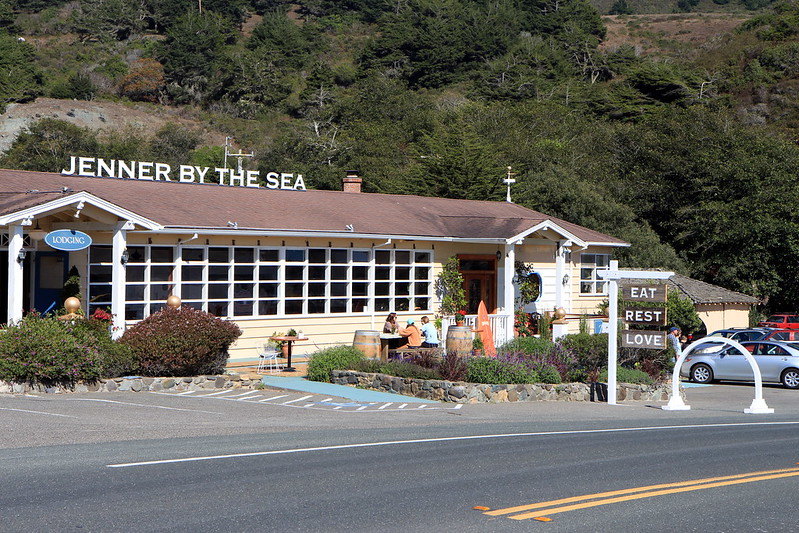 Jenner is located at the mouth of the Russian River just before the river flows into the Pacific. The town has less than 100 people but does offer a few places to grab a bite to eat and a couple of hotels where you can stay, the Jenner Inn and the Timber Cove Resort. The Jenner Inn has rooms with a more classic look and the Timber Cove has a more modern style.

From Jenner, you can loop back to Guerneville and Santa Rosa on Highway 116 which winds along the Russian River. In the summertime, the river is alive with canoes and innertubes as people take a lazy float in its cool waters through the shady Russian River Valley. Stop at Korbel for a taste of the local champagne.

The drive from Bodega Bay to Jenner is on a recently repaved stretch of Highway One. It has great open views and is an easy drive. The road north of Jenner is a much more interesting drive. The road climbs and twists and turns. Allow 21 minutes to drive the 11 miles to Fort Ross.

Fort Ross is an old Russian settlement dating back to 1812. While Napoleon was busy trying to conquer Russia, the commander of its Alaska possessions sent an expedition down to Northern California to set up a supply base. The Alaska colony based out of Sitka Alaska (New Archangel) was a rich source of fur for the fur trade, but not a great place to grow crops.

When I studied California history in school, my teachers painted a picture of the Russians coming this far south from Alaska as if they colonized the entire coast in between but nothing could be further from the truth. This colony started with only 25 Russians and 80 native Alaskans and never grew particularly large. Only the imposing blockhouses and a large number of cannons discouraged the Spanish further south from dislodging the Russians.

The local Native Americans (the Kashaya band of the Pomo tribe) formed a treaty with the Russians and had good relations with them. While the Russians built a chapel, they had not brought any priests along. They made no effort to convert the locals to their religion, unlike the Spanish.

The Russians only stayed in the area until 1941. The plan to grow wheat on the Sonoma Coast was not a great one. Any visitor to the area with its cool foggy climate would know that. Other crops did fair better. The Russians, along with the Spanish and Americans hunted the local fur seal population until they were so depleted that the Russians declared a moratorium on hunting.

In 1941, the Russians packed up and left. They sold Fort Ross to another soon-to-be-famous American living in California, John Sutter. 7 years later the California Gold Rush would start at Sutter’s Mill outside of Sacramento. 26 years later the Russians would sell off their Alaska possessions to the United States.

Today Fort Ross has been restored to what you might have seen in the Russian era.

The fort itself has 7 buildings: the Kuskov House (named for one of the managers of the fort), the Rotchev House, the magazin, the officer’s quarters, the chapel, and two blockhouses. Only one building is the original building which housed the last manager of the fort, Alexander Rotchev. The original chapel collapsed in the 1906 earthquake.

The fort was sold George Call in 1873 and the Call family continued to run a ranch on the land for one hundred years. They sold part of their with Fort Ross to the California Historical Landmarks Committee in 1903. The Call Ranch House is just north of the original stockade.

South of the stockade is an old Russian graveyard.

The Russians sent scientists who studied the local people, weather, geology, flora, and fauna. One of the rooms in the Kuskov house is set up as it might have been for one of these scientists with skulls, rocks, and other samples.

Stop in the visitor center on your way in to walk through the exhibit about the Russian presence in California. Also, note the recreation of a windmill at the end of the parking lot. The Russians built what is believed to be the first windmill in California.

If you are visiting the Sonoma Coast from Santa Rosa or the Sonoma Valley then a great route is to loop from Sebastapol to Bodega Bay (possibly taking a side trip to Occidental for a zip line experience at Sonoma Canopy Tours), driving up the coast to Jenner. Stop along the way to hike, explore tidepools to collect shells. Then from Jenner, you can head further north to Fort Ross or loop back to Santa Rosa along the Russian River.