You can’t throw a rock in California without hitting some vineyard, winery or wine tasting room and the San Jose Area is no exception. While it may not have as many wineries as Napa, Sonoma or even nearby Livermore Valley, it has some easy to access wineries that are worth exploring. 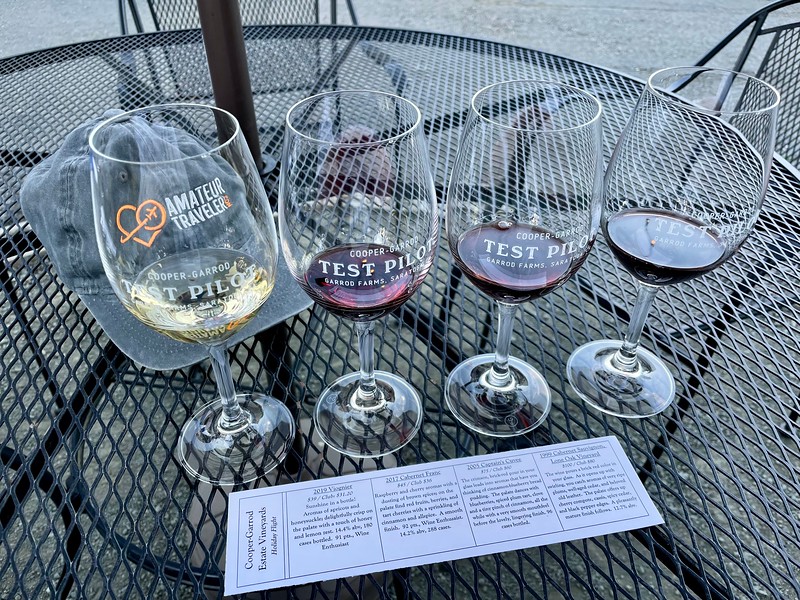 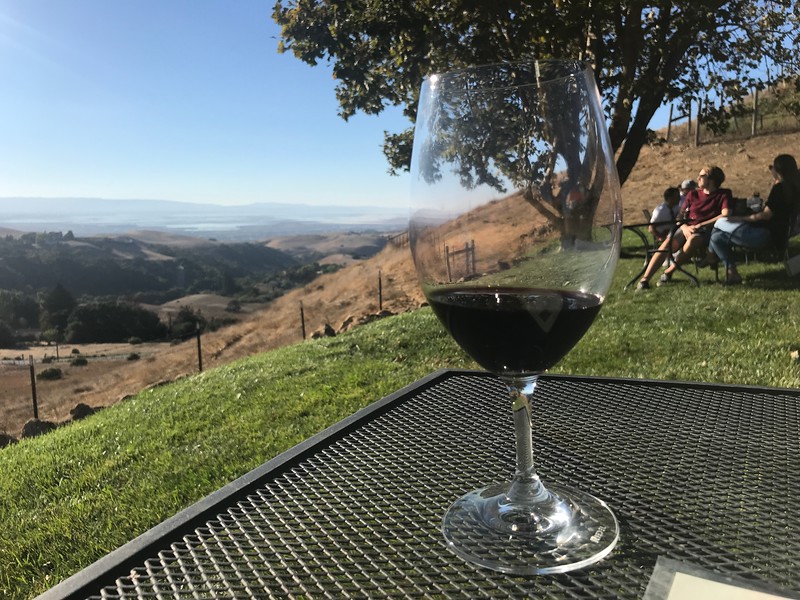 Big Dog Vineyards is an easy vineyard to love and has one of the best views of the Santa Clara County (Silicon Valley) of any local vineyard. I told my wife in the parking lot that “if their wine is any good I have a new favorite local winery”.

They have 3 different tasting menus:

You can get food pairings of sandwiches from Bear Bites or chocolates. Outside food is not currently allowed.

Big Dog opened their doors in 2009 and tends to produce single varietal wines. They have an estate vineyard at the top of the hill but also produce wines from grapes grown in the Livermore Valley, Paso Robles, and elsewhere in California. We enjoyed their wines, particularly some of the reds.

Disclosure: Big Dog did sponsor (pay for) our tasting.

Cooper-Garrod is one of our favorite local wineries. We are in their wine club. Unlike many of the other wineries, this one is not at the top of a mountain with a view but it is the only local winery that I know that is also a popular stable. Their wine club comes with a discount on trail rides that we have not yet taken advantage of.

Currently all of their wine tasting is outdoors although they have an indoor tasting room as well. All the wines are estate wines.

The Garrod family has been farming the area since 1893, originally producing dried prunes and apricots which were a typical local crop. Their first vines were planted in 1972. George Cooper who married into the family was the first winemaker after a career as a NASA test pilot. Some of our favorite wines from Cooper-Garrod are their red blends which they produce under the Test Pilot label. The various Test Pilot wines are named after aircraft.

On a warm Saturday afternoon in January, Piccetti Winery is a party. In addition to the usual tasting room, Piccetti has a large picnic area. The parking lot was full and the place was jumping. There was at least one big party and one bridal shower in the picnic area.

You can customize a tasting of 5 wines from their available award-winning wine list (17 different wines when we were there). You can choose whichever 5 wines you like. We had an option of three whites, a sparkling Zinfandel, 3 ports and 10 red wines. A tasting costs $20 and if you buy a tasting you can get a 10% discount off a wine purchase. 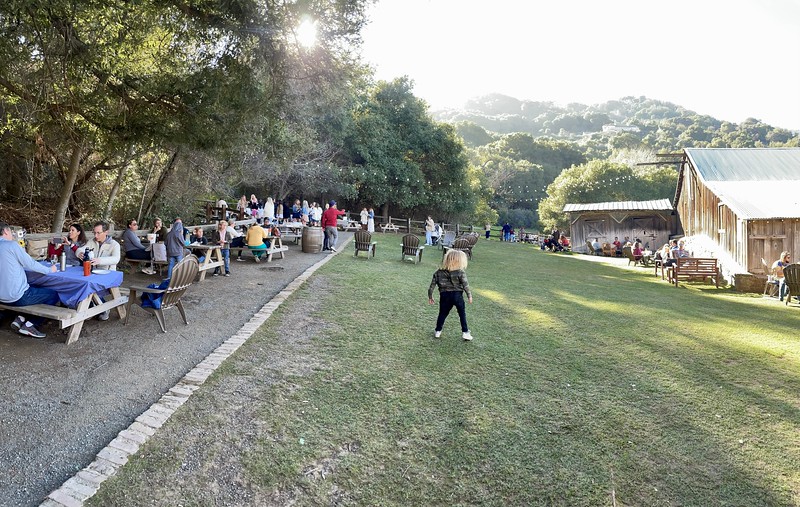 You can do the usual stand at the bar style of tasting or, my preferred option, take your wine back to a your picnic table or Adirondack chairs. When you are ready to try your next wine, just take your tasting sheet and your glass back to either the indoor or outdoor bar.

They had a couple varietals that I was less familiar with such as their 2019 Graciano (Spanish) wine and their 2019 Cinsault from the world’s oldest surviving Cinsault vines in the Clements Hills AVA in the San Joaquin County. The Cinsault is a white wine from the Languedoc region of France although we did not personally encounter it in that region.

There has been a winery here… most of the time… since Picchetti was started in 1872 by the Picchetti brothers Vincenzo and Secondo (yes the second brother’s name was literally “second” in Italian”). The Picchetti family produced wine here until 1963 when the winery was closed and sold to become a park. The winery reopened as the Sunrise Winery in 1982 and then was bought by the current owners, the Pantling family in 1997 who reverted the winery to the original Picchetti name.

One of my favorite wines was the Brother’s Blend which was 75% Tempranillo, 12.5% Syrah and 12.5% Malbec. The wine pays homage to the origins of the Picchetti Winery, the Picchetti brothers, and to the two Pantling brothers who run the winery with their mother and sister.

The 3 ports served were each quite different. The first was a wonderful ruby red port which was served with a small piece of fudge. It was wonderful! They also served an even sweeter white port, the Reserve Angelica, and a Mission port that was served with “ice and a slice” (on the rocks with a twist of lemon).

The winery is leased from the Picchetti Ranch Open Space Preserve which is near the Stevens Creek Reservoir. Come earlier in the day and go for a hike, then bring a picnic lunch to enjoy in the afternoon with a tasting or a bottle of wine.

Even further up Montebello Road from Picchetti Winery you will find Ridge Vineyards. Ridge has a very different approach with its winemaking. While Picchetti sources grapes from all over the state, Ridge is focusing on a Single-Vineyard approach. This vineyard is its Monte Bello (Black Mountain) vineyard.

The Monte Bello Ridge was first used to grow grapes by the Italian-American Doctor Osea Perrone from San Francisco, who planted vineyards here in 1885. It was one of many California vineyards that did not survive prohibition. New vines were planted in the 1940s by theologian William Short. When he wasn’t playing amateur wine-maker, he taught on the Franciscan Contemplative Tradition.

Four partners restarted the winery at Ridge in 1959. The first president of the winery and winemaker was Dave Bennion who quit his job at the near-by Stanford Research Institute where he studied magnetic circuits and robotics.

The Monto Bello area and Ridge in particular are highly regarded internationally for the quality of their wines. At the Judgement in Paris in 1976, Ridge’s Monte Bello wine placed 5th of 10 places in the competition, the 2nd highest placement for the American newcomers. In 2006, these same wines, now over 30 years old, were rejudged in a reenactment of the original tasting. The Ridge 1971 Monte Bello came in first place and by a large margin (18 points). 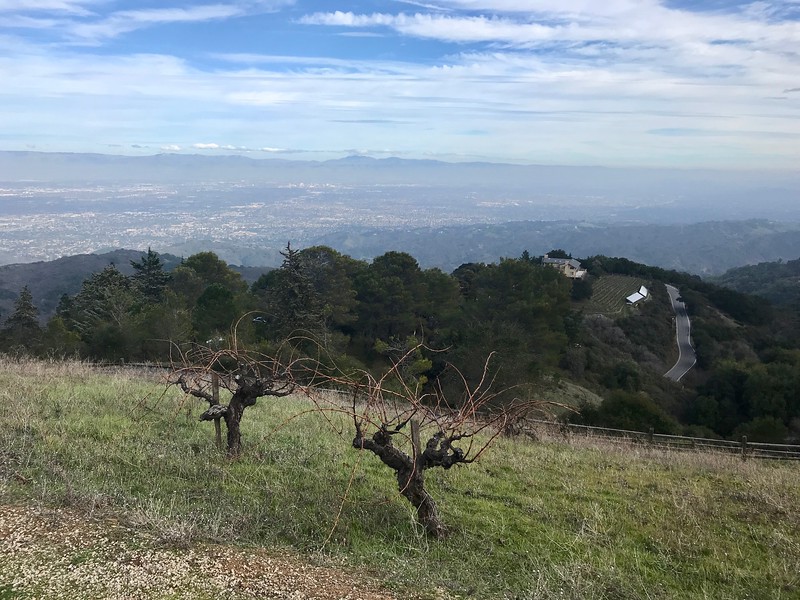 It is another one of the local wineries with a great view.

Tastings are currently by appointment only, 7 days a week in groups of 6 or less, $20 per person.

The Mountain Winery is one of the longest running wineries in the region. It was originally the Paul Mason winery and was built in 1905 and again in 1907 after being destroyed by the 1906 San Francisco Earthquake.

It may be one of the most popular wineries in the area, but not necessarily for its wines. They have hosted a concert series in the summer that draws many well known acts. It is a great venue for an outdoor concert… if a bit chilly.

The winery bills itself as the “Valley’s Hidden Gem” and that is just about right. I had not been to the Mountain Winery for a number of years but returned with my wife and some friends in the process of writing this article… although a bit too late for that 4 pm time when they stop wine tastings. We all had forgotten how very lovely the Mountain Winery setting is.

The winery has a number of roomy patios made to handle the crowds of event attendees and a parking lot that won’t fill up except for an event. It also has views across the hills outside Cupertino and Saratoga on into the Silicon Valley. It was not the clearest day when we were there but we could still make out the Apple campus, downtown San Jose, Moffett Field, Cupertino’s City Center, and the Pruneyard.

The wine tasting room also has soft drinks and beer on tap. 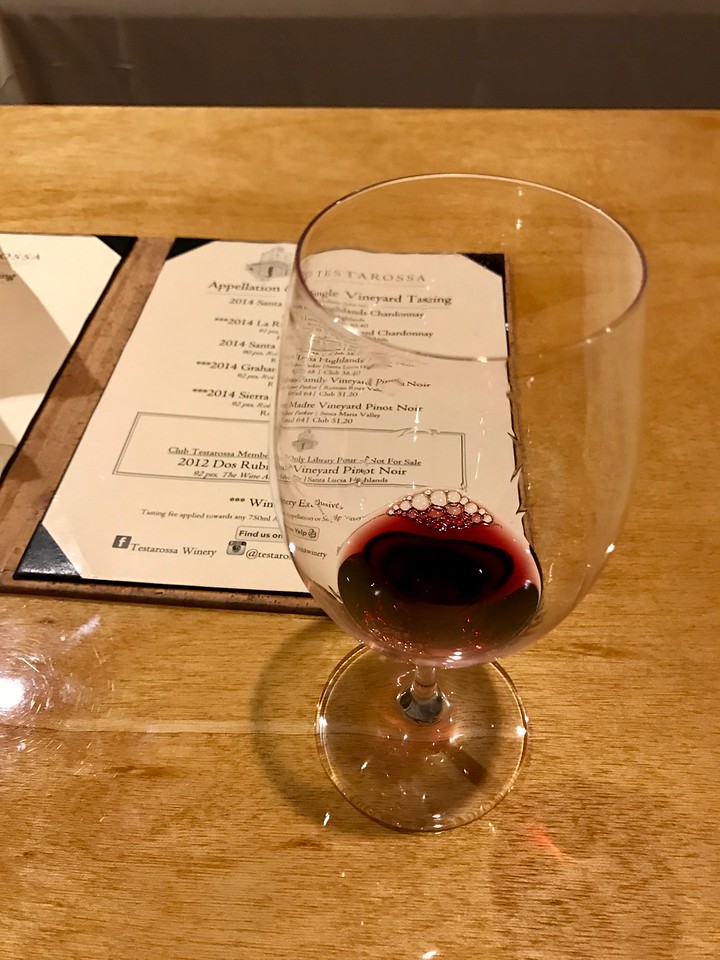 Only a mile up the hill from downtown Los Gatos is the popular Testarossa Winery which is known for its Chardonnay and Pinot Noir wines. The local newspaper in San Jose, the San Jose Mercury News, has rated Testarossa as the best local winery pretty consistently for more than a decade.

Like so many of the other wineries, the owners, Rob and Diana Jensen, did not start in the wine business. They met as Electrical Engineering students at Santa Clara University. They have been running the winery since 1993 with, as you can see, more than a little success.

The winery itself was built in 1888 as the Novitiate Winery by the Jesuits in seminary at what is now Santa Clara University. Since the winery was used for making church wine, it is one of the few wineries that actually expanded during prohibition, doubling in size. The winery declined in the 1960s and was closed in 1968 and all the seminarians at the time were moved to Santa Barbara. The Jensens moved to the property in 1997.

One of the unique features of the property is a good old fashioned wine cave that looks like it could be in a winery in France. The winery also has wine tasting outside on its porch. 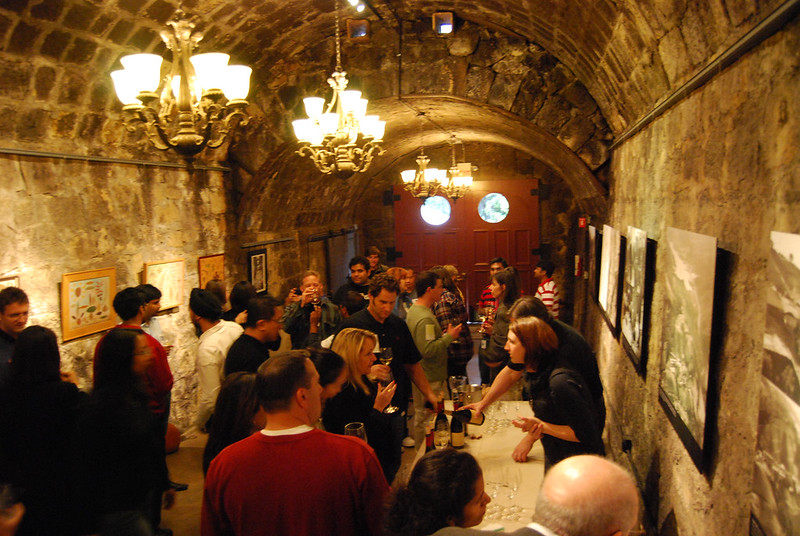 Only 3 miles east on Summit Road off Highway 17 that connects San Jose and Santa Cruz you will find two quite different wineries one next to the other. The older of these wineries is the Burrell School winery where the vineyards date back to 1973. It is based in and around an old one room school house which dates to the village of Burrell which was founded as a mountain top community in 1879.

While the Burrell School has not been an actual school since the 1950s, it keeps the educational heritage in the name of some of its wines. Our tasting ($25) included such wines as:

The cost of the tasting can be applied towards your purchase of one or more bottles. Our favorite of these was the “Teacher’s Pet”… and not because I was a teacher’s pet as a child… although I was.

Burrell School Winery is a great place to be as the sunsets, sitting out on their porch with a glass of wine in your hand.

Open to the Public Saturday & Sunday only, 12-5 pm. Live music on Saturday afternoons.

Right next door to Burrell School is Regale Winery and Vineyards. They are close enough that you can park at one winery and walk to the other, but the two wineries are quite different. Regale has large lovely grounds with lots of space to host a number of small groups all at the same time and can also host larger events like weddings. It has bocce ball, a giant connect four and a giant Jenga set, but a sign on the way in declares it as an “adults-only” space. They do not allow children under the age of 13 on the grounds… but they are pet friendly.

Regale does not have a tasting menu but you can buy one of 5 different wines by the glass ($15) or you can buy a bottle of wine from their wine list to share. They are best known for their Chardonnay and Pinot. We had a glass of the Pinot and the Merlot which were enjoyable.

A local caterer has taken up shop at Regale, L’Appetito. L’Appetito serves hand-crafted wood-fired pizzas, antipasti, salads and homemade tiramisu. Since they are not open, currently at least, at dinner time, you might consider timing your arrival at Regale for a lunchtime glass of wine and a wood fired pizza. 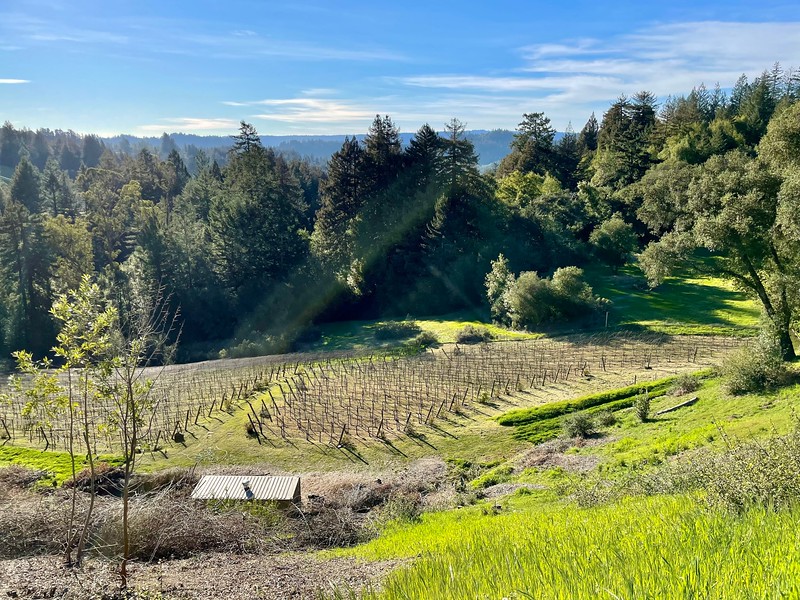 You are not that far from a winery when you are in the San Jose area. While researching this article I learned more about the long history of wine making in the area. So raise a glass to the scientists, theologians and engineers who have become the local wine makers of Silicon Valley.