There are a number of options for the best views of the Golden Gate Bridge. In case you are not touring the city with a local photographer,  let me show you some of my favorite places to take a picture of the bridge.

San Francisco Side of the Bridge

Most tourists approach the Golden Gate Bridge from the southern side, or the San Francisco side so let’s start there.

Some great photos of the Golden Gate Bridge can be taken by stopping at the Golden Gate Bridge Welcome Center at the south end of the bridge. Parking can be difficult at this end of the bridge. There is a very small parking lot to the right/east as you head north on the bridge, another parking lot on the left/west side and more parking can be found down the hill at the Battery East Parking Lot.

While you are there, you can also learn more about the bridge at the welcome center. There is, for example, a cross-section of one of the large cables that support the bridge. You can see that it is made of a number of individual wires.

Entrance to the Bridge

You can take a photo like the one above by beginning the walk on the bridge from the southern side. Before you go very far you can see the whole bridge from slightly off to one side as well as Fort Point which is the historic Civil War Fort that the bridge was literally constructed on top of.

If you take a short hike down the hill from the Golden Gate Bridge Welcome Center there are two different vista points that will get you a bit more of an angle at the bridge. The first is called Post Card Point and this is perhaps one of the most iconic views of the bridge. Time your photo and you can get a picture of a cargo ship or a sailboat crossing under the bridge.

Along the south end of the bridge, to the east of the Golden Gate Post Card Viewpoint you will find trails that weave in and out of the trees. From one of these trails, you can take a different view of the bridge peeking out from behind the trees. The south side of the bridge is more wooded than the north end so better if this kind of framing is what you are looking for.

Further west and down the hill a bit is a second vista point which is the viewpoint closest to the Battery East Parking lot. The advantage of this viewing spot is that it better fills the frame of the horizontal image. This is one of my favorite angles for a photo of the bridge.

The Road to Fort Point

For a very different angle on the bridge, take the road from Chrissy Field to Fort Point. If you stop closer to Chrissy field you can catch the waves lapping on the beach with the reflection of the bridge in the water. This photo was taken around sunset. You can see that much of the bridge is backlit but the towers pick up the light of the sunset.

Along the water in between Fort Point and Chrissy Field is a pier called Torpedo Wharf. You can walk onto Torpedo Wharf to get a photo from closer to the surface of the bay without having the land in the foreground of your shot.

The view of the bridge from Fort Point is an unusual one as you are seeing the underside of the bridge. You want to be near or even on the roof of the Civil War fort at Fort Point for this shot. 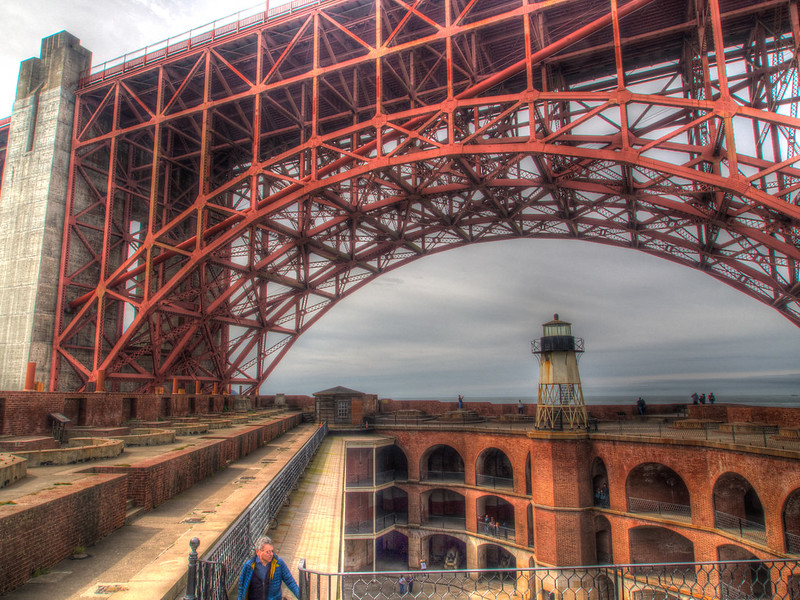 If you can get access to the roof of the fort you can get a photo that shows the 3 story brick fortification of Fort Point and the unique structure that is on the southern end of the bridge that is built over it. You can still see where the cannons were placed to defend the Golden Gate long before the construction of the Golden Gate Bridge. 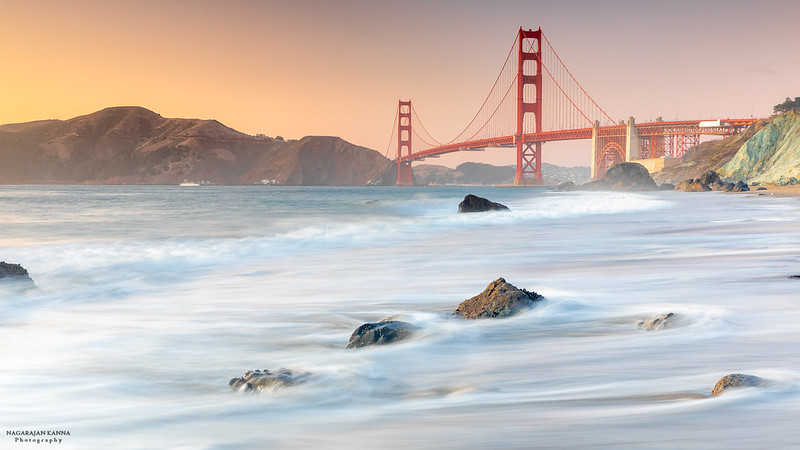 Be advised that Marshall’s Beach is a mainly gay nude beach, so you might want to be careful where you point that camera. 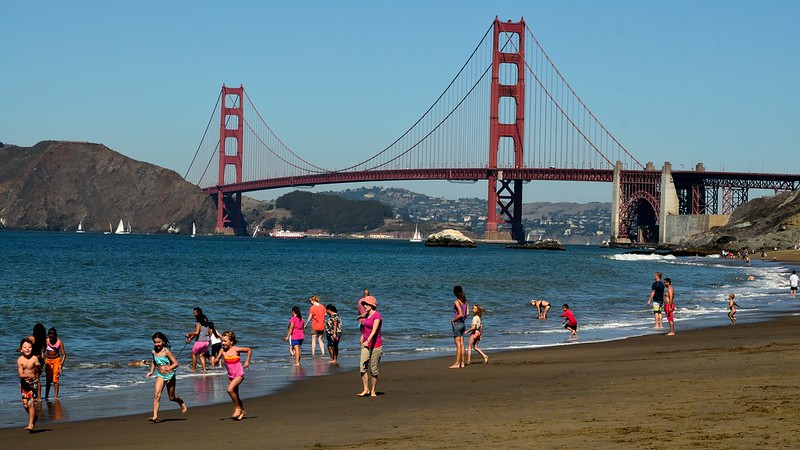 Another popular shot of the Golden Gate Bridge is looking back into San Francisco Bay from Baker Beach which is just a bit further west than Marshall’s Beach on the southern or San Francisco side. Again, this beach is best for shots in the afternoon or at sunset.

The north end of Baker Beach is a nude beach. It has been described as having a “Burning Man-type” atmosphere. Don’t stare. Don’t be weird… well be weird in a Burning Man way.

North End – Marin Side of the Bridge

If you have seen a photo of the Golden Gate Bridge oriented vertically with one tower lined up in front of the other, it is likely taken from the View Vista Point which is just off Highway 101 north of the bridge. You can access the bridge from this visit point but it is for most people a quick stop and a photo op of the Golden Gate Bridge or the San Francisco skyline. 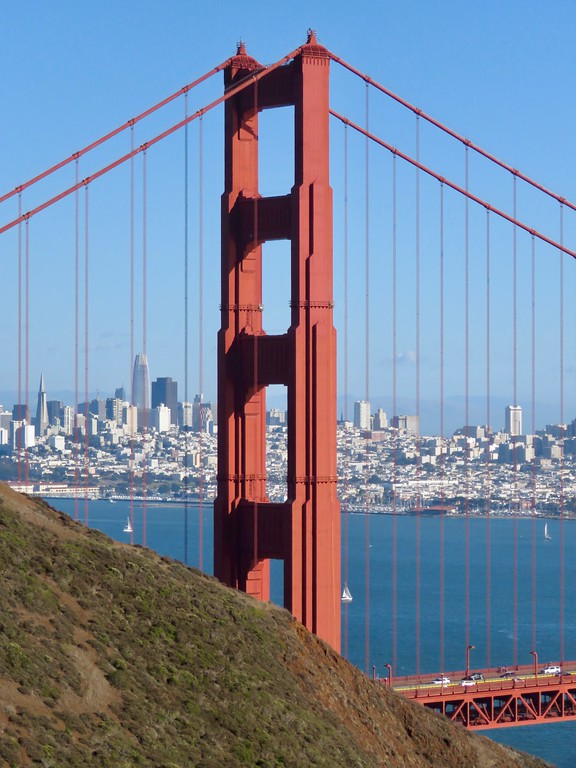 The Marin Headlands is a great spot to visit in its own right but also the only place to line up the bridge and the iconic San Francisco skyline.

If you want to capture all of the bridge from the north side, particularly in the late afternoon, a great place where you can look down on the bridge is Hawk Hill in the Marin Headlands. You will need to get on your hiking shoes for this one as it is a .7 mile walk from the parking lot to the top of the hill. In the spring the hill is covered with wildflowers and as long as you are making the climb keep an eye out for the hawks after which the hill is named. 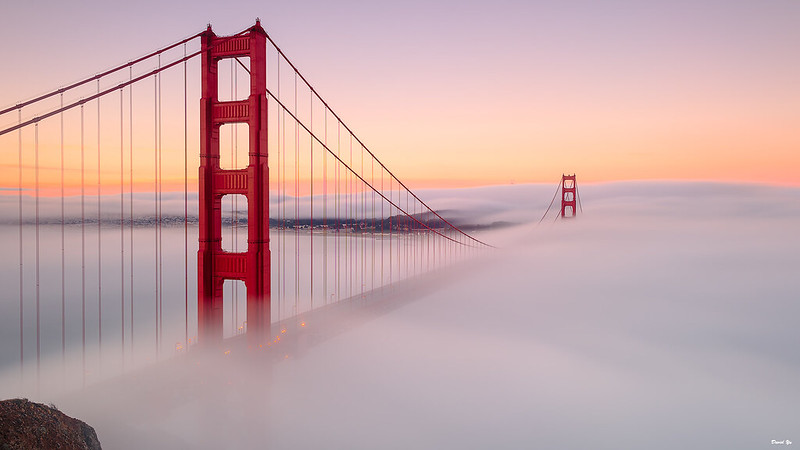 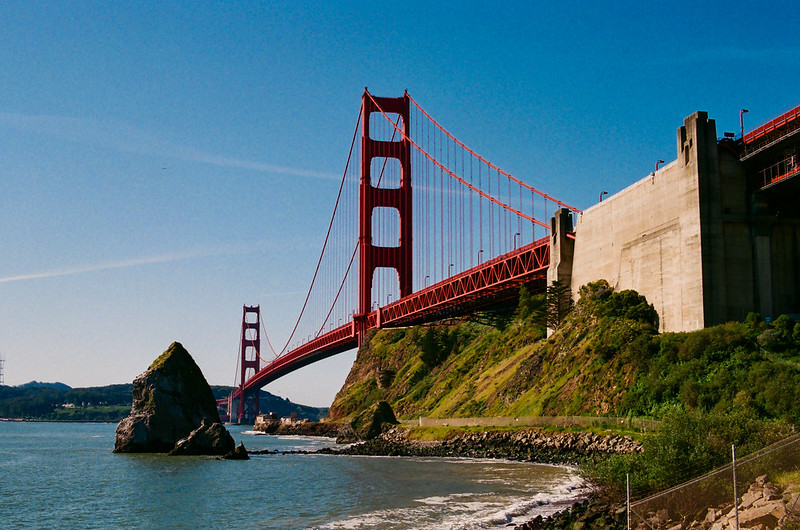 To get a different view of the bridge from closer to the waterline on the north side of the bridge take the first exit on Highway 101 after the vista point and follow the signs to Fort Baker. This area is also part of the expansive Golden Gate Recreation Area.

Fort Baker is also the home to the beautiful Cavallo Point Lodge which may be the hotel in the bay area with the best view of the bridge from their grounds… although not from your room per se.

It is fine to take photos of the Golden Gate Bridge from one of the many vista points but I would also strongly recommend for photographers to walk or bike the bridge. Not only will you get some very different detailed photos but you will also have some great views of San Francisco from the bridge. 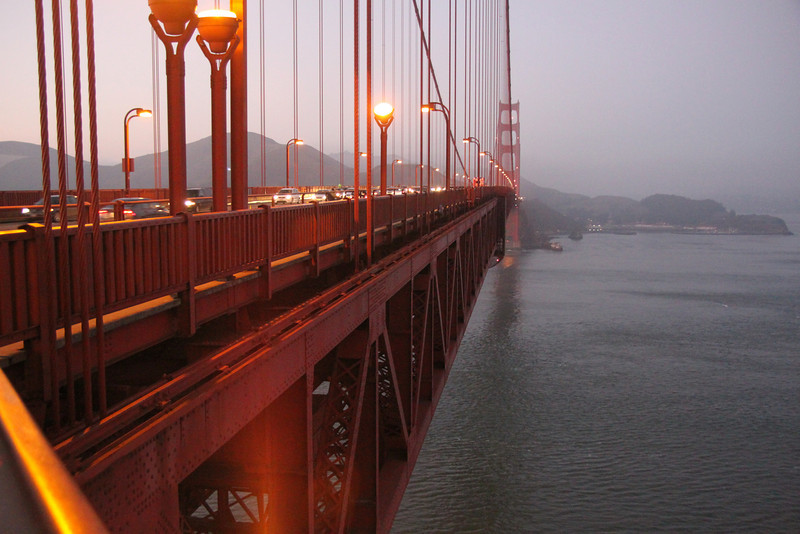 The designer of the Golden Gate Bridge left photographers a gift at the two towers. If you walk across the bridge, the walkway extends out further at both the north and the south tower. This makes it a great place to get photos that show the exterior of the bridge in close-up.

The two towers are also a great place for photographing the detailed work of the bridge. The south tower, in particular, has a commemorative plaque with a very art deco font choice.

And don’t forget to look up at these imposing towers. Remember how big that cable looked like at the welcome center?

Most visitors prefer crossing the bridge from south to north on the east side which has views of the San Francisco skyline. The bridge is long at 8,980 ft (2,737.1 m), about 1.7 mi (2.7 km). Don’t feel like you have to walk the whole bridge. Most of the best views will be seen by walking halfway and back or even just to the south tower.

Along the walkway, there are a few niches that will let you get a bit of a peak at the structure of the bridge as you did at the south tower.

I personally don’t find the roadway of the bridge itself to be particularly photogenic with the possible exclusion of the tool booths which are at the south end of the bridge. They are no longer manned as the Golden Gate Bridge uses an automati billing system triggered to your car’s license plate.

Remember that Civil War fort that we saw from the south end of the bridge?  Pay attention when you are walking the bridge to when you will be passing over it to get a glimpse into this old for.t You can clearly see the circular structures where the fort’s cannons were placed. The fort was to protect the city and the harbor from Confederate raiders, but none ever came.

For a different view of the bridge, get out on the water in a boat or on one of the islands in the San Francisco Bay.

One of the most popular sites in San Francisco is the former island prison of Alcatraz. I wanted to list Alcatraz here for completeness, but this is actually not one of my favorite views of the bridge. From Alcatraz, you can see the entire bridge but because of the angle, you are actually looking at the south tower from an angle that is completely parallel to the tower and can’t see any of its shape.

From the southern end of Angel Island near Battery Ledyard you can see the entire Golden Gate Bridge but you will need a telephoto lens to get any photo at all. You can see from this photo why you won’t usually see photos of the bridge from this angle. The photos from either end of the bridge capture the beauty if not the shape of the bridge better. 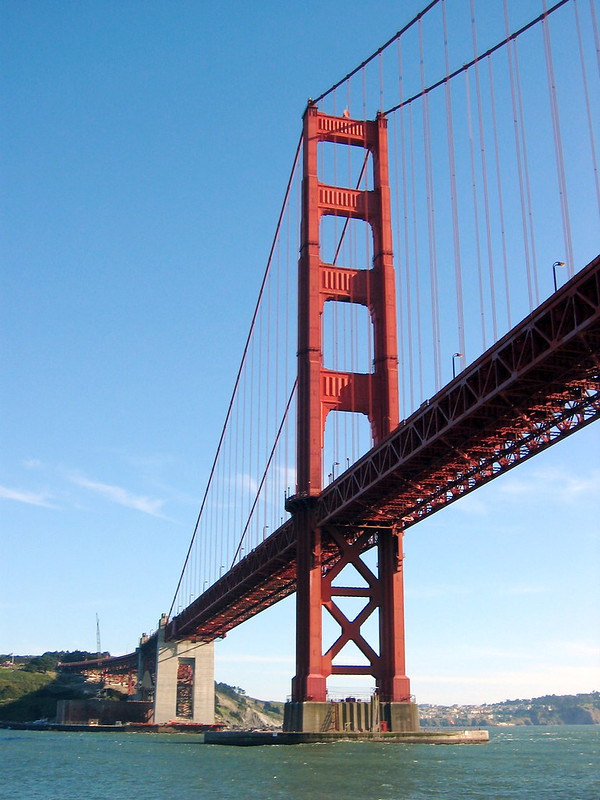 From a tour boat

If you want to get a photo of the middle of the bridge from the underside then you will need to get out on the water in a boat. If you don’t have your own boat there are a number of great tour boats that will take you around San Francisco Bay. The most famous of these are the Blue and Gold and the Red and White fleets that leave from near Pier 39.

If you are taking a picture of the bridge and you want to make sure you can see it, you should know that on many days it will be covered with fog from the late afternoon (say 3 pm) to the morning (maybe 10 am). So if you look out of your hotel room in the morning and don’t see the bridge, the fog may… or may not burn off by the middle of the day.

This part of California sees basically no rain from sometime in May until some time in October so you won’t have to contend with actual rain if you visit in those months. But, you may have to deal with smoke. California is prone to wildfires in the summer and early fall and if you happen to be in San Francisco on the wrong day… the smoke will last until the wind changes.

The Golden Gate Bridge can be particularly pretty when it is backlit by the light of the setting sun… assuming you can see it at all through the fog.

On a clear day, I particularly enjoy walking across the bridge starting in the late afternoon so that you will have the bridge in sun, at sunset, and at dusk.

Whether you see it from the south side, the north side, or a cruise ship. Whether you see its colors glowing in the bright sun or fading into the mist, the Golden Gate Bridge will give you a great iconic subject for your photos or just a great background for your selfies.